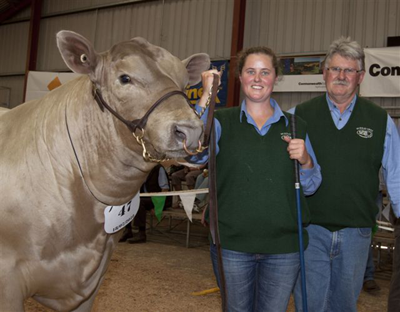 Exhibitors from across Victoria and South Australia came together under judge Corey Ireland, Wagga Wagga, NSW. Mr Ireland was impressed by the class of the heifers and said he was looking for cattle that would fit into his home operation and any drought program.

Ronsard Snowdrop G20, an 11-month-old heifer exhibited by Rachel Crothers, Ronsard Murray Greys, Wangoom, was awarded the first blue ribbon of the day and went on to take out reserve junior champion female.

“She has depth and capacity and great udder development and will be able to spend many years in a breeding program,” Mr Ireland said.

Craig and Jacinta Grant, Coleraine, won the senior champion cow and grand champion female with seven-year-old cow Lindsay Elizabeth with a five-month-old bull calf at foot, Lindsay Gladiator. Mr Ireland said he couldn’t go past the cow for her length and capacity.

“We had our own expectations, but to see how they line up against quality cattle – that’s the most pleasing thing,” Mr Slattery said.

Mr Slattery said the show was a good indication of what was to come for the Murray Grey breed this year, leading into the national show and sale at Wodonga and the breed’s feature show to mark 50 years of the society at the Royal Melbourne Show in September.

INTERBREED COMPETITION RESULTS
All Murray Grey Exhibits were also given the opportunity to participate in the Interbreed Judging at Hamilton, where the feature breed dominated, taking out Junior Female, Reserve Junior Bull and Senior & Reserve Bull.

‘She has all the traits needed in the beef industry; she’s productive and in calf and away we go’, Judge Duncan Newcomen said.

Senior Champion bull Lindsay Enforcer was noted by the judge as being ‘full of red meat’ and for his muscle tone.