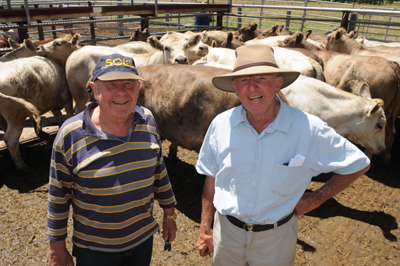 Buddy Alekna from Khancoban, VIC, purchased Murray Grey cows and calves for $1150 during the sale, pictured with Peter Sutherland.

Life Member and principal of the Thologolong stud, Peter Sutherland, was on hand to purchase 68 Murray Grey heifers for a client, E. Ollington from Smithton TAS.

To round the sale up Murray Grey steers were sold to $840, with Nick Barlee from Khancoban VIC purchasing the steers.

When asked about the results of the sale Peter Sutherland said, ‘It was a great result for the Murray Grey breed and it was one of the biggest crowds seen at Corryong in a long time’.