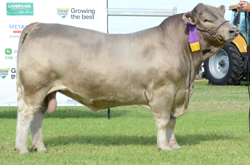 Floods in the south couldn’t stop Yamba Murray Greys walking away with the Most Successful Exhibitor title at the NSW Beef Spectacular Murray Grey Feature Show, despite bringing only a team of bulls.

Brian Powell, despite having had water through his house on his Narrandera property was on hand to witness Yamba take a clean sweep of the Champion Bull titles.

Junior Champion bull went to Yamba Feisty, a 740kg son of Monterey Ceduna C81. Described by Ms Guaran as ‘a bull with plenty of carcase, length and butt shape’, Yamba Feisty had an EMA of 115cmsq and rib and rump fats of 6 & mm respectively.

The Senior section saw another Yamba bull take out the top title of Senior Champion Bull, with the 1125kg Yamba Exhibit overcoming some tough competition to claim the title. Sired by Yamba Bonanza B32, Exhibit was chosen as the Senior Champion Bull by Ms Guaran because ‘he is a bull with performance, he has tremendous growth for age and he is a stylish bull as he moves around the ring’.

The title of Grand Champion bull was a battle of the Yamba Bulls, with the Junior, Yamba Feisty coming out on top. The younger bull came out on top at the end of the day because Ms Guaran saw him as ‘such an outstanding example of the breed’.

In typical Murray Grey fashion, the female section was very competitive with Ms Guaran given many challenges with the quality females on display on her way to choosing her champions.

Ms Guaran chose Onward Melody F72 as her Junior Champion Female, a daughter of Onward Farouk. Melody caught the judges eye as an ‘outstanding young female, with beautiful length, natural thickness and her ability to cath your eye the minute she walks into the ring’.

The Senior Female Scetion saw only one cow and calf class, but this did not make separating her winners any easier, as Ms Guaran was presented with a fine example of the matrons of the Murray Grey breed.

In the end her Senior Champion ribbon went to Glenliam Farm Antoinette Z73, a duaghter of Malparara Roseberry with a six month old bull claf at foot. Ms Guaran chose this unit as her Senior Champion Female because she ‘is a lovely structured female with a beautiful calf at foot’.