Several new milestones with the sale were achieved by principals Lachlan and Kate James who described the sale as “a great endorsement of our carcase quality focus”. 22 of 23 bulls sold to a top of $8,000 twice and average of $4522, reflecting the solid competition for lots throughout the sale. 6 registered heifers were also sold to a top of $1500.

Impressive weights and eye muscle areas combined with finishing ease appealed to both stud and commercial producers with registered bidders from Queensland, Tasmania and throughout NSW. 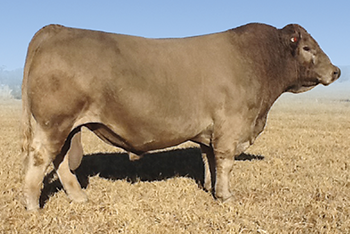 The first $8,000 top priced bull was Lot 1 Wallawong Ultramodern, a 1140kg son of Wiltshire Crown Prince. Described as “one of the most dynamic and industry relevant sires we have produced in recent years”, he combined outstanding volume, depth of body and hindquarter capacity and was purchased by new buyers PBR Properties, Queensland. Ultramodern had an EMA EBV in the top 1% of the breed and all growth traits in the top 1%. His raw EMA scan was 139 cm2 with fat scans of 18mm and 11 mm on rump and rib.

The equal top price bull was the full brother to Lot 1, Lot 8 Wallawong Vanilla who also achieved $8000. By Wiltshire Crown Prince out of Wallawong Aletta, 815kg Vanilla combined outstanding growth traits with softness and eye appeal. He possessed a raw EMA scan of 109cm2 and fat measurements of 7mm and 5mm on rump and rib. Repeat  Wallawong clients Rod Hoare and Helena Warren of Cadfor Murray Greys, purchased the bull for their stud operation near Binda, NSW. 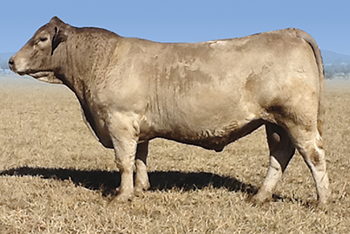 A son of 2011 top priced bull Wallawong Ripsnorter ($14,500) also made $6500, Lot 9 Wallawong Vantage. The 24 month old sire had an excellent combination of BreedPlan performance data being below average for Birthweight EBV and in the top 5% of the breed for EMA EBV along with average fat EBVS. He was purchased by James Menzies, Armidale NSW for his commercial herd targeting the domestic market.

Wallawong stud principal Lachlan James said: “It was a great result. What was impressive is the support shown by our repeat commercial clients and the level of new interest this year.75% of bull buyers were return customers and that’s a real endorsement to the quality of cattle we are producing and client service we strive for.”

“Murray Greys are going from strength to strength and people are willing to invest in the best genetics with the right balance of carcase shape and quality.”  Mr James added.

Kate James also spoke to the crowd of her successful use of Wallawong Premium Beef at the Gunnedah Saleyards Canteen where patrons always enjoy eating high quality Murray Grey meat.