A Swag Of Ribbons For A Grey Day 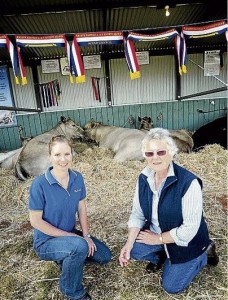 Mrs Tucker will take over the Harris’s Parknook Murray Gray stud, at Swan Bay, with husband Mitch about May next year.

“We already have two cows – we were given a cow as a wedding present this year and she’s had a calf,” Mrs Tucker said.

Mrs Tucker said that Parknook attended no other shows this year and was not going to Scottsdale until they were told that Murray greys were to be this year’s featured breed.

It was one of six Murray grey studs to exhibit at Scottsdale.

“We had to support the breed,” Mrs Tucker said.

And their support was well- rewarded, as Mrs Tucker related.

“We won senior champion, female and champion bull in the Murray grey section,” she said.

“The cow was judged senior inter- breed female and her calf was judged champion beef calf of the show, so we were pretty happy.”

Mrs Tucker said that Parknook had been competing at Scottsdale for a long time and usually did fairly well.

“We’ve had a few champions in the past and this was another good year,” she said.

Mrs Tucker, who has been involved with Parknook “forever”, said that she had no plans to exhibit before next year’s Scottsdale Show.