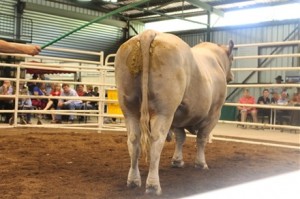 COW and calf packages were the order of the day at the 25th Premier Murray Grey Sale in Wodonga.

This was strongly supported by a number of new breeders out to source some of the most well known Murray Grey genetics from across the country.

Lot 1, Monterey Annabelle D119, a grey cow with a grey bull calf at foot, made the top price tag of $6000 and was also awarded best presented female of the sale.

Offered by G&J Buller, Monterey Murray Greys, Karridale, WA, the rising six-year-old cow had a May 2013-drop calf at foot by Monterey Xerox and was depastured to the same bull.

Annabelle was purchased by Stephen Sims, Aurora Murray Greys, Nowra, NSW, to be used in an embryo transfer program for the stud.

Mr Sims arrived at the sale with no intentions to buy, but said the stand-out lot 1 took his eye straight away.

Monterey also offered the top-priced bull of the sale, again at $6000, this time for Monterey Top Gear G18.

Errowanbang stud manager Garry Haines represented the Gerathys at the sale, on the search for outcross genetics to introduce to the herd.

The new and volume buyers looking for female genetics saw 30 of 39 cows and calves average $2808 and get the top price tag of the sale.