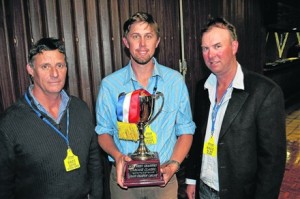 IT was a case of third time lucky for Jason and Penny Schulz, who claimed top honours in the state’s only commercially orientated grassfed carcase competition – the Southern Grassfed Carcase Classic.

The Upper South East stud and commercial breeders had been around the mark in 2010 and 2011 but this year a 13-month-old heifer sired by one of their Raven Limousin bulls and out of a commercial Murray Grey cow was judged grand champion carcase among 230 entries from across SA and western Vic.

The 206-kilogram carcase with 5 millimetres of rib fat and an eye muscle area of 72 square centimetres scored 88.005 points from a possible 100 for market specifications, sale-able meat yield and MSA eating quality.

During the presentation dinner last Friday night at Naracoorte Football Club, Mr Schulz was overwhelmed by the acknowledgement of their breeding program, which aims to turn-off grassfed Limousin-cross milk vealers weighing 360 to 420kg at 10-11 months of age.

“We are so pleased to not only win our class but also take out the grand champion carcase title, an accolade that I hold in high regard,” he said.

“Our involvement with the SGCC enables us to benchmark where we sit in the industry and identifies whether our cattle fit our goals and desired markets,” he said.

In the past six years the carcase competition has evolved into a prestigious event with the strong support of Teys Australia’s Naracoorte abattoir, where the cattle were processed between October 21 and November 1.

Classic chairman Allan Kain said the difficult start to the season was particularly evident in the quality of the heavier 300-420kg classes with scores generally a few points lower than the previous year. Last year four entries including the grand champion scored 90 points or more.

“Many producers have done a good job getting the cattle up, given the tough start to the season, and those with high-quality bull selection and good finishing systems really performed well again,” he said.

He was thrilled to see 15 per cent more cattle entered than last year and at least a dozen new entrants looking for improved feedback, or motivated to support the Royal Flying Doctor Service.

“It has become a great benchmarking system,” he said. “For producers, being able to assess weights, muscle and fat to meet market specs and getting fat colour and meat colour right, is important to get the best money for livestock we can, especially with beef prices not as good as they could be.”