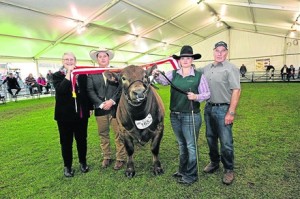 ONE of South Australia’s oldest Murray Grey studs claimed the top honour in the Royal Adelaide Show Murray Grey judging with a young bull with doing-ability and muscling.

It was a great moment for Rodney and Ruth Gregurke, Tarlina, Port Lincoln, who returned to the Royal after an absence of four years and won the supreme exhibit sash with one of their two entries, Tarlina Hamburg.

The 42-year-old stud has shown stud cattle intermittently but has enjoyed considerable success in the Royal’s schools led steer competition over the years.

Tarlina’s last supreme win was with Monterey Momentum in 1987.

“Hamburg is out of a heifer and has got extraordinary eye muscle with 124 square centimetres for a bull of that age,” Mr Gregurke said.

He is the ideal bull for breeding steers for the vealer market.” Judge Hayden Green – a Limousin and Angus breeder from Mittagong in NSW – said it was the balance of fleshing ability, performance and reproductive soundness which put the April 2012-drop sire above the grand champion female.

“There is a similarity in type between the male and female but one animal had extra carcase and fleshing, so my supreme exhibit is the bull,” he said.

“Reproduction is the key to making money and this bull has reproductive soundness too.”

Both were daughters of Monterey Stirling C344 which Bottlesford bought as a bull calf six years ago from Monterey Stud’s WA on-property sale.

“We have bought a few bulls from WA which have really worked well,” stud principal Darren Koopman said.

The heifer, Bottlesford Joyce H30 beat the older matron in a close decision for her “exceptional foot shape”.

“She is a tremendous big-volumed heifer and good-structured,” he said.

“We need structure for longevity and she will be an extremely profitable cow for the beef industry.”