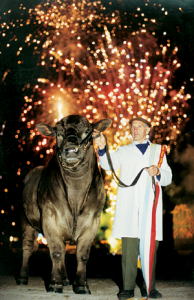 An iconic photo from the 40th Anniversary Celebrations at Melbourne Royal in 2003, when Graham was awarded Life Membership.

It is with great sadness that the Murray Grey Beef Cattle Society acknowledges the passing of Life Member Graham Wesley.

Graham established the Orcadia Park Murray Grey stud in 1969 and developed his herd into one of the leading studs throughout its’ 37 year history . Looking back through the pedigrees of numerous high profile Murray Grey sires and dams, you will not be at all surprised to find Orcadia Park bloodlines.

For over two decades Graham and his family successfully lifted the profile of the public image of the Murray Grey Breed through their numerous Interbreed Royal Show Champions. Orcadia Park was named Most Successful Exhibitor at Melbourne Royal 14 years over a 20 year period from the 1970’s to the 1990’s.

In 2003, during the 40th Anniversary celebrations of Murray Greys  stepping into the show ring at Melbourne, Graham was recognised for his dedication and understanding of the need to further the quality and advancement of the genetics, breeding and display of superior Murray Greys to the industry overall, when he was awarded his Life Membership of the Society.

Graham will be sadly missed by the wider Murray Grey Community.