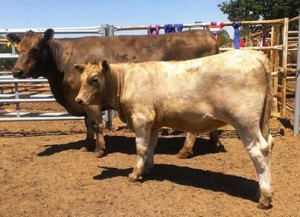 A big weekend for Cadfor Murray Greys at our local Crookwell Show.  For the fourth time in 5 years we won the Supreme Champion Commercial Exhibit, this time with Cadfor Phillipa C129.  Our wins have all been with different cows under differen…t judges.  Our team was 2 heifers, 3 cows with calves and 5 steers.

This was the first time we exhibited steers and we won Champion Prime Exhibit with a 6 month old vealer calf.

Our other results were: Murray Grey Heifer – 1st & 2nd

Murray Grey Cow (no more than 4 teeth) with calf – 1st

There were 70 cattle entered in 4 breeds (MG, Angus, Hereford and Santa plus crossbreds).  MGs also won the team of 3 steers over 400 kg (owned by Bill and Sally Bensley).  Great day for the Greys.