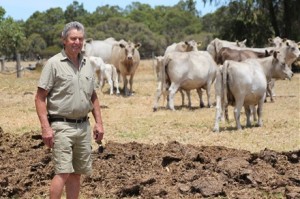 Roy has been farming for 34 years and formerly ran a large intensive piggery, with beef cattle being a sideline to the main enterprise.

These days he considers himself retired, after selling their 1000 sow piggery and associated acreage and downsizing to 105 hectares (260ac).

But he said he would continue to breed and sell beef cattle for as long as he was physically able.

“The piggery consisted of about 10,000 pigs in total and so the cattle were run as more of a hobby,” Roy said.

“These days the cattle are our main enterprise and we have shifted from formerly breeding Simmentals to now only breeding Murray Greys.”

The operation has been solely breeding Murray Greys for the commercial market for the last 10 years.

“The Simmentals of course were a European breed and we found they were quite high maintenance,” Roy said.

“We were attracted to the Murray Greys initially for their easy-care traits.

“We have found we can run more animals a hectare and their feed conversion is much better, while also being much better suited to the environment here.”

But by far the greatest factor has been their fast maturing traits and their versatility for various markets.

He said they found it took them a lot longer to get the Simmentals ready for the market and it required much more input.

The Murray Grey’s ease of calving has been a huge positive for their operation with Roy able to boast never having to pull a calf for the entire time he has been breeding them.

Currently they run a fully self-replacing 80 head breeding herd and buy all their bulls from one stud.

The bulls have always been purchased from Max and Kurt Wise, Southend Murray Grey stud, Katanning.

Roy said he believed part of the reason the Murray Grey cows he breeds are such good doers, is due to the matter-of-fact “what you see is what you get” way the Wises breed and sell their bulls.

“They breed the type of cattle I was looking for when we first went into Murray Greys,” Roy said.

“The animal you see is the animal you get and they are paddock-run and reared and so perform well when you bring them home.

Murray Greys are a good all-round breed according to Roy, which certainly makes running them very easy.

With this in mind there are still specific traits he looks for when making his decisions on bull purchases.

“I do use the estimated breeding values of the animals first,” he said.

“Then I will look at the physical line and conformation of the animal.

“The two stand-out EBVs I look for are milk production and growth figures, as these directly affect how early I can get the calves turned off.”

He said another specific characteristic that appeals to his breeding goals is the leg length.

If long-legged progeny were produced, Roy would take them out of his program.

This definitive approach does not stop at genetic traits and characteristics of progeny, it also carries through to the performance of the heifers.

If a heifer does not produce a calf after mating, she is sent to market and replaced from the breeding stock.

“That keeps it simple because if it doesn’t work, don’t waste time,” Roy said.

“When selecting our own heifers we look a lot at the conformation and growth of the animals.

“We probably do things a bit differently here though, because we can carry cows with calves through summer on the kikuyu and couch pastures.

“For this reason we calve at the end of December through to the end of January.”

Having such a successful breeding program has allowed the operation the luxury of not focusing on their calving percentages.

Roy said this year they have had 37 calves from 40 cows in three weeks in one herd and the other three heifers may still yet calve.

As part of their overall breeding they purchased new bulls every three years on average, although this was dependent on the performance of the individual bulls.

All the progeny produced within their program is sold through Landmark, but this was the only constant factor.

Calves were on average sold between nine and 11 months, but this was flexible to suit market conditions.

“We watch the market and sell basically wherever the market is at the time,” Roy said.

“We aim for maximum growth and conformation and hopefully the best sale outcome.”

Some years they have also sold privately and believe their ability to be able to meet various market options is because of the versatility of their animals and their breeding.

All the cattle are pasture-fed, with the operation cutting hay each year and not feeding grain to their cattle.

Another plus within their program is the fact they do not worm their cattle.

“We are in a good area and we don’t buy in outside cattle,” Roy said.

“We have found the cattle we produce have a good worm resistance and this is passed down from the bulls through to their progeny.”

Having such a successful program allows the Christmasses confidence in the future of their commercial cattle breeding.

Roy said in the future he is looking to retaining a base pure Murray Grey herd and also bringing in another breed to add some hybrid vigour to the herd.