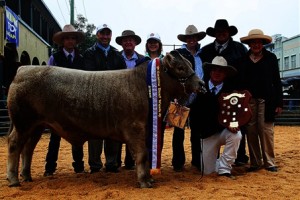 By Shan Goodwin
Courtesy The Land

DESPITE something of a Queensland invasion in the led-steer ring at Casino’s Beef Week festival on Saturday, it was a Northern Rivers-bred Murray Grey, prepared by somebody with family links back to the foundations of the famous festival, that took the crown.

James Dockrill, whose grandfather Jim bred steers at Clovass and was one of the pioneers of Beef Week, was 12 when he first prepared a led steer for competition at the event.

Throughout the years he has picked up numerous class wins, a reserve champion, and the top honour on the hook, but Saturday’s champion led steer broke new ground for him.

Mr Dockrill picked him out from Emjay’s 2013 drop before he was weaned and he has been on feed for 120 days.

Jellybean’s first outing was Tenterfield Show in February and by the time he returned to Casino for Beef Week, he’d covered a fair few kilometres winning ribbons as far afield as Gympie in Qld.

Close to 80 steers, covering more than 15 breeds, lined up for 2014 Casino Beef Week four-class led-steer competition, with almost a quarter coming from Qld.

In the stud competition which followed, Rukenvale’s Triple M Red Angus stud collected the main prize against a very strong field of 50 head.