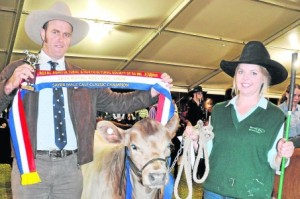 It was not the first broad ribbon for Kentucky, who was at foot with his mother Bottlesford Sarah, senior champion and supreme Murray Grey exhibit the previous day.

He was sired by Woodbourn Warrior A69.

Judge Lincoln Job, Marellan Shorthorns, Cumnock, NSW, praised the concept which combined young people and young cattle – both of which were the future of the beef industry.

He found it difficult with the variation in type and age but was looking for structurally correct cattle.

“Faults get bigger with age so a small fault in a calf can become much bigger in a two-year-old bull, or a seven- or eight-year-old cow.”