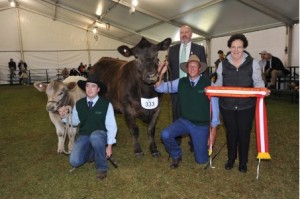 FOR the second time in four years, Gerald, Jeanette and Darren Koopman, Bottlesford stud, Tungkillo, won the red and white sash for a cow and calf combination in the Murray Grey section.

It was the fourth time in six years they had won the sash for grand champion female.

They capped off their victory with the most successful exhibitor award.

The reserve junior champion heifer at the 2012 show, the Koopman’s Bottlesford Sarah G32 came from winning bloodlines: sired by Monterey Sterling C344 and out of Woodbourn Sarah-Lee B87. She had a four-month-old calf by Tasmanian sire Woodbourn Warrior.

Mr Koopman said he might retain the bull calf of the supreme exhibit.

“He’s certainly looking very good at the moment,” he said.

“This young sire has tremendous appeal, and very few holes – but he’s just a baby bull.

“The cow has the length and weight which equals money.

“Just her width of pins, she is very refined, with good shoulder structure and tremendous volume.

“She’s got great balance and structure and she’s doing the job – look at her calf on the ground.”