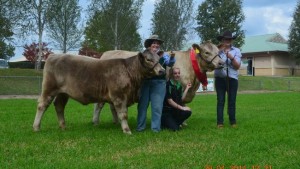 A WAGGA cattle breeder received the top price of $10,500 for a cow and calf at the Murray Grey National Show and Sale at Wodonga.

Meanwhile, vendor Mary tenBroeke has decided to hang up the cattle cane after more than 40 years in the stud cattle industry.

She founded her Southern Cross Murray Grey Stud in Finley before moving to Wagga.

And now at 81, she has decided it is time to take a break from stud cattle breeding.

Southern Cross Felicity F26 is a descendent of the first cow the stud purchased from a leading breeder in Victoria which at the time was known as Maneroo.

“The Felicity line always produced the best calves in the herd so it is fitting the best has been kept until last,” she said.

Mrs tenBroeke together wither her daughter Annette has started the Riverina Iris Farm on their property and will invest the proceeds from the Murray Grey sale into that venture.