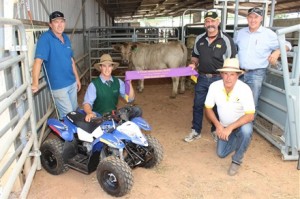 Bunbury City Motorcycles, together with the Wagin Agricultural Society, put up a pint-sized Polaris 50 four-wheel motorbike as a prize for the winner of the grand champion award and hence the section was hotly contested across the three classes.

Judged as the champion heavyweight exhibit of the show before it went up against the other class winners for the grand champion title, the Murray Grey steer was described by judge and feedlotter Paul O’Meehan, Borden, as being the exhibit with the ideal degree of finish.

“Basically he was the ideal type for a grainfed steer destined for the domestic market,” he said.

“If you had a big line of those you would be extremely happy as a processor.”

The grand champion exhibit would not be a great contestant on the popular TV show The Biggest Loser and at the morning’s pre-show weigh-in recorded a hefty 504kg.

A score of 84 points out of a possible 100 was marked against it making it a clear stand-out for the grand champion accolade.

Standing in reserve to the champion heavyweight exhibit was a Blonde d’Aquitaine-Angus cross steer which was exhibited by Charlie and Leanne Staite, C & L Staite, Kendenup.

This steer was prepared by John Barber who fed the steer on a Semini’s feed mix on behalf of the Staites.

The Blonde d’Aquitaine-Angus cross steer weighed 487kg and scored 80 out of 100 in the points system.

Going back to the entry-weight exhibits, the lightweight section saw eight entries in the 340kg-400kg range and this was won by John and Flo Kitchen, Carenda Angus stud, Katanning.

A 398kg Angus steer, the animal scored 77 out of 100 points to win the lightweight ribbon and Mr O’Meehan said that he was a very nice well-muscled steer with good finish.

Second place in the lightweight section was awarded to Kevin Armstrong, Willowbank, Benger, for a 354kg Murray Grey steer and third place went to a 356kg Limousin heifer exhibited by John Barber and Lone Chorley, Manjimup.

John Barber and Lone Chorley again came second in this section this time with a Murray Grey-Limousin cross steer which weighed 442kg.

Overall, judge Paul O’Meehan said that the cattle that did the best in the competition were the ones that had the best degree of finish and that generally the top three placegetters in each category reflected their various degrees of finish.

“I thought the lightweight class was one of the hardest to pick as they were quite even as a group but it will be interesting to see how they hang up,” he said.

“Basically if something wasn’t finished they weren’t placed but on the whole the quality of the cattle was very good and they all had the potential.

“They just needed a little longer on feed.”