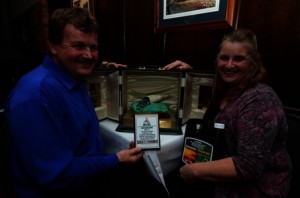 By Mark Griggs
Courtesy The Land

Mr Chessum said he was “chuffed” by the award as it had taken some years to rebuild the stud herd after the devastating drought of the 2000s.

“We were down to our last few dozen of our core breeders by the end of that drought,” he said.

“It was touch and go, but Helen and I are just so delighted that our efforts of rebuilding have come to such a fitting fruition.”

In this 17th year, the competition originated in 1994 with a few gaps during the drought.

This year 28 teams of four steers representing many beef breeds and their crosses from throughout the State and Victoria participated in the trial which began in November 2013.