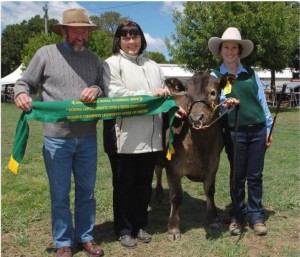 Judge Peter Falls commented that the steer was a clear class winner because of his tremendous balance between muscle and the ability to fatten.

As a carcase he scored 88 points and placed second in the lightweight division.

He had a couple of extra millimetres of rib fat, being the only thing preventing the steer taking home champion carcase.

The day will be organised by the Mid North Coast Breed Promotion Group.

The day will give visitors a chance to view the Glenliam show steers and stud team, as well as their sale lots for the coming Murray Grey national show and sale in April.

Lunch will be provided, but intending visitors are asked to RSVP for catering purposes to 0428 964583 or glenliam@bmr.net.au