The Lure Of Trout Led To Murray Grey Success 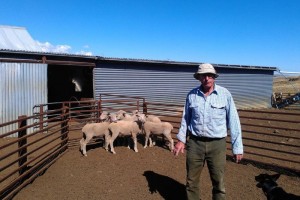 Making sure there were trout nearby was the only criteria in buying a farm virtually sight unseen from the other side of the globe which led to a rewarding grazing career for a prominent Monaro farmer who is finally winding down.

Howard Charles who has operated the Kydrabah Murray Grey Stud and run Merino’s near Nimmitabel in southern New South Wales still loves farming after coming to Australia as a young boy. “Farming is a young person’s game.

“I still love it and get great satisfaction from doing it but at the same time I know that young people do it better and they are really switched on and I love seeing what they are doing and it is fantastic.”

Howard’s farming career, which has resulted in him being a prominent figure in agriculture in Australia’s Alps, came after his English doctor father and Australian-born mother decided it would be better to live down under.

Prior to this, the then six year old Howard had spent a large part of his early years living in Germany, where his father had been involved in the health sector as part of the occupying forces post war.

For Howard reading and speaking German at the time was more natural for him than his native English tongue.

Howard’s father Gilbert was “a rabid if you like, trout fisherman, loved his fly fishing” and when his wife Betty made it known she wanted to farm, the fishing instruction was the only demand imposed by his father when the hunt for an Australian farm began.

Since then Howard has been involved in the operation of two properties, the first to the north of Nimmitabel, which his mother chose in 1960, and then since 1980, the present property south of the small Monaro town, which is where he and wife Annie farmed while raising two children.

While they may have moved, there are two constants, Murray Greys and “a beautiful trout river at the end of the farm,” which is located on the McLaughlin River.

It was his mother who “fell in love” with the Murray Greys in 1960 “and I have had great fun carrying on from there in developing the stud and doing what we have done with it,” Howard explains.

Going over the windswept property which not surprisingly is the site for several turbines that are to be part of a major wind farm, the Murray Greys are doing well despite the tough conditions.

When first his mother and then he were developing the Murray Greys it was much more common for the region to produce Herefords and to a lesser extent Angus which are now the dominant breed.

He agrees that there were sceptics who stood back and watched his mother and subsequently his efforts with Murray Greys along with others who also took them on.

His cattle are not just doing well in an environment not far from the Murray River near Albury where the breed was first developed.

Murray Grey bred from Howard’s stud can also be found many thousands of kilometres away at Curtin Springs Station near Alice Springs in the Northern Territory.

They have adapted so well to the very different environment that they took out the champion carcass several years ago at the Alice Springs show in the first time they were entered.

It is the harsh conditions experienced in the high country of the Monaro that Howard believes “sorts out the wheat from the chaff” when it comes to stock such as Murray Greys and merinos.

“That is what has evolved, the toughness in all the livestock on the Monaro and most people will tell you that when the sheep and cattle go away from here they do so much better because they have evolved under those pretty hard conditions.”

Those harsh conditions haven’t stopped Annie from developing a vast garden consisting of flowers and nearby vegetables, a dramatic contrast to the barren rocky ground that surrounded the run down homestead which stood on the property they purchased in 1980.

A lush green lawn, surrounded by flowers with extras such as a sundial makes up the green oasis which is known throughout the district.

The merinos are now gone, having been sold by online auction, and the stud will also eventually go.

Annie and Howard’s two children have pursued careers in film and IT and won’t be coming back to farm.

Howard and Annie will remain on the property, for Annie her garden, while Howard given his strong involvement in agriculture is certain to keep an eye on the more junior farmers in the district even if he thinks it is a young person’s game.