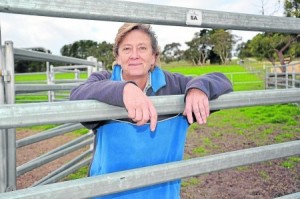 THE first cattle in SA to top $3 a kilogram were a surprise bonus for the sellers.

But Mrs Fraser said they had not planned to have calves on the property at all, normally fattening-up cows. Then some of the cows calved, leading to the vealer sales.

She said they used to have a replacement mob, but with a smaller block and having off-farm income, the flexibility of trading appealed, so they decided to “get skinny cows and fatten them up”.

“It works very well on a smallholding,” she said.

The primary thing they looked for when buying cattle was “value- for-money”, and with that in mind they tried to buy cheaply, looking for store cattle to fatten.

“The best profit for us comes from buying skinny cows, since they already have frame and only need to fill-out again,” she said. “If you’re buying younger stock, you have to grow the frame, and fill them out.”

“We’re looking for the type of cattle that trade want,” she said.

They primarily sell through prime sales, although they have also sold over-hooks and are fully-accredited with Meat Standards Australia to do so.

Both have off-farm jobs as Mrs Fraser operates a small vineyard contracting business while Mr Fraser, a shearer by trade, drives trucks.

“We’ve been known to turnover cows and double their value in eight months,” she said. “It’s a pity we can’t do that every time.”

Dependent on feed supplies they can have up to 70 animals on the property, but generally average about 50 across their 80 hectare block and 40ha of leased land.

In keeping with the motto of value-for-money and maximising profit, the Frasers rely purely on pasture.

But Mrs Fraser said they liked to make sure the cattle had the best opportunity on that pasture.

Because they arrive from various sources, she gives each a drench, a vaccination and a B12 shot before they leave the property.