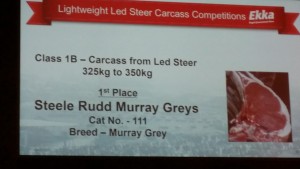 Every year, thousands of people flock into the RNA Showgrounds to be a part of one of the largest agricultural shows in Australia, The Ekka. 2015 did not disappoint. Weaving through the crowds and into the stud cattle shed, your eyes are immediately drawn to the magnificent Murray Grey cattle lining the walls.

2015 saw 12 outstanding exhibitors bring their prized Murray Grey cattle into the big smoke for the Queensland Royal Show. 4 of those exhibitors being extremely active Junior members: Mitchell Dundas of Emjay Cattle Co, Lismore, Luke and Ryan Cox of Ryablu Murray Greys Fernvale and Steve Martin, Sixpence Park Murray Greys, Tenterfield all made their way to Brisbane to parade their cattle in order to show the judges all the hard work they had put into the preparation of their show cattle.

However, the victories did not end in the stud cattle ring. The Brisbane Royal Show or Ekka as it is fondly known has the best Hoof and Hook led steer competition in the country. Every year, exhibitors from far and wide, bring truckloads of steers in to compete in the famous competition. In 2015 we saw over 350 entries of cross and purebred cattle entered in this category. The young guns of our breed did not disappoint with more than 10 purebred Murray Grey steers entered and eligible for the prestigious Ken McDonald Shield Team.

Brad Densley of Steele Rudd Murray Greys, East Greenmount and his children Briar, Holly, Archer and Drew, (whom are all Junior members) exhibited a well-muscled, even grey calf who placed in the top 10 on the hoof, in the 325kg-350kg class, but then took out 1st place in the carcass section with an impressive 92 point carcass.

Young guns, Briar and Holly Densley helped their father, Brad to prepare and fit the Steele Rudd Murray Grey calf who was picked to be a part of the Ken McDonald Shield team, the two other calves making up the team were bred by Bob Lea Bookoola Murray Greys Inverell and David King Yallembie Murray Greys, Inverell. (Pictured below) The Steele Rudd steer, paraded by 14 year Briar, placed with 92 points bringing the Murray Grey team up to the top of the pack and into a well-deserved 1st place position in the carcass section of the Ken McDonald Shield competition, (beating the Limousin team who led on the hoof by 11 points.)

The 2015 Ekka was a fantastic week for all who participated, but it was especially pleasing to see so many bright and young Murray Grey breeders taking the time to breed and prepare their own cattle for all to see.  These results are great to see and I feel honoured as a junior member to share these results and see so many young members showing a passion for our great breed the Murray Grey. 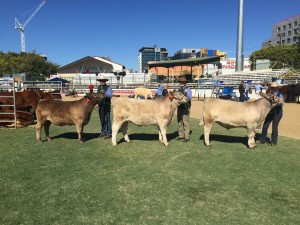