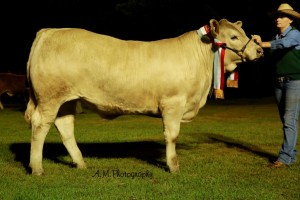 David King of Yallembie Murray Grey Stud won the heavyweight class with this 520 kg Murray Grey Cross steer (born 9/10/14) which then went on to be named the Grand Champion Steer at the North Coast National last week from 88 entries. He sold for a record price for the North Coast National at $7.90 (dressed weight). He was paraded by Taylor Withers of Rob Roy Fitting Service at Inverell.