At the judging of the Interbreed Champion of Champions, judge Terry Nolan of Nolan Meats Pty Ltd had a tough time choosing between the breeds pictured below.

Baroona Park Princess was in the ring down to the last four cows and calves . Terry Nolan made mention during his deliberation that he really “liked the Murray Grey cow”.

Congratulations to the Taylor family on this achievement at the EKKA. 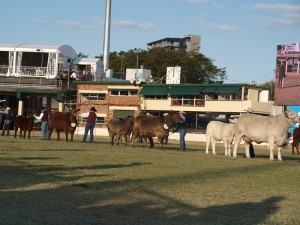