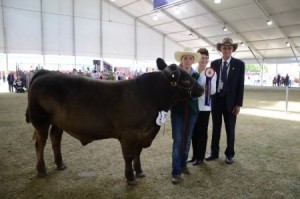 By Amelia Williams
Courtesy The Land

Mr Phillips said the bull was everything a producer could ask for at its age and could influence any herd it went into.

The bull also had measurements of seven and five milimetres of rump and rib fat.

The best exhibit’s sire, Monteray Fastrack F35, was junior champion of the Melbourne show in 2011.

Miss Bell has only been producing her own cattle for two years but has already had plenty of success.

The grand champion bull was showed at Berwick show, Victoria, and awarded junior champion Murray Grey bull and third in the interbreed competition.

Grand champion female was awarded to Bundaleer T.T B33 and its calf at foot, Wallawong T.T. K110, by Wallawong Murray Greys, Curlewis.

Sydney Royal was the first time stud principal, Lachlan James, had showed the cow, apart from the Tamworth show just two weeks ago, where she won champion Murray Grey.

Mr James purchased a herd of 43 cows from Bundaleer Murray Grey Beef Cattle stud, Karridale, Western Australia, three years ago and the champion female was one of those lots.