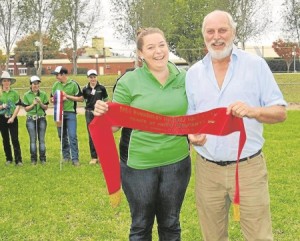 IT WAS scorching hot, alarmingly dry and worlds-away from Jess Murphy’s lush Gippsland cattle property when she arrived at Rockybank, Roma, Queensland.

As part of a two-week work scholarship, 22 year-old Ms Murphy undertook the 2000 kilometre drive to the western Queensland property which gave her a taste of how one of Australia’s largest beef producers operates and a glimpse at the sheer size of Northern operations.

“I got to the property after a three-day drive and it was the end of a severe heat wave,” she said.

“We went mustering the next day in 45°C heat and I thought ‘some rain would have been nice’.”

It was November, and a stark contrast to conditions on the family’s Labertouche property that had experienced significant rain that meant it could bale hay during summer.

The trip was awarded as part of the Woodbourn Murray Grey Youth (MGY) Ambassador Award competition held each year at the Murray Grey National Show & Sale. The awards are rigourous – the young entrants are judged on their public speaking ability, interviewing strengths and industry knowledge.

Ms Murphy was awarded runner-up 2014 National Woodbourn MGY Ambassador and her prize was the intense work experience on the 14,600-hectare cattle station.

“For the first couple of days I was just trying to understand the sheer scale of the operation,” she said.

“Handling 200 head of cattle in a yard is greatly different to handling 30 head back home.”

She said that initial feeling of being overwhelmed by the operation was squashed after the property experienced rain on day three of her stay.

“It seemed more like home and gave me confidence that it was just another cattle property and that I knew what I was doing. It was still a cattle farm at the end of the day,” Ms Murphy said.

During her stay, she worked alongside a gap-year student and they were responsible for mustering 300 breeders to undertake a new AI program.

Due to dry conditions, the property had an estimated 3000 Tuli (a Zimbabwe breed) and Tuli cross Murray Grey cattle, down on the 4000 head stocking capacity.

“It was an interesting cross but the Murray Grey’s temperament, calving ease and fertility made them work well together in the north’s conditions,” Ms Murphy said.

“The Tuli breed can handle the hot and dry conditions so to cross them with the MG adds greater maternal traits and the light coloured coat doesn’t take-in as much heat as darker coated cattle.

“The Greys contributed to the profitability of Rockybank because of the calving ease and fertility rate over the Tulis, means there is a grater conception rate among breeders.”

The property was acquired by the Kidman juggernaut in 2013, from the late world bull riding champion John Quintana who was killed in a plane crash the same year.

The property is used as a stud breeding centre for the company.

It was an incredible experience which she said introduced her to the magnitude of Australia’s large beef operations.

Ms Murphy will speak at this year’s 49th Murray Grey National Show & Sale, that will be held in Wodongda on April 19-21. The Youth Ambassador Award will again be held at this year’s event.