The ability of Murray Greys to impart a consistently good consumer eating experience off grass will ensure the future of the breed.

John, of Tunmgamah, Vic, first began his career with Murray Grey cattle in 1976 at Orcadia Park stud, owned by the Wesley family. This was followed by positions at Homebush, Watermill and Lerwick Park studs.

“The silver gene is strong so if a Murray Grey bull is used over a European, British or Bos indicus breed, the progeny will be grey.’’

Although the breed’s popularity is on the rise with peri-urban landholders, John believes the future lies with large commercial herds.

“The breed has remained strong in Western Australia thanks to the efforts of individual studs working on promotion,’’ he said.

John and his wife Heather have worked hard at promoting the Murray Grey breed over the decades.

During the 1980s they volunteered their time with the Gippsland Murray Grey promotional group, with John serving as chairman for several years.

“The group’s Lardner Park display each year was important for the breed,’’ he said.

“It attracted commercial beef and dairy farmers, and we sold a lot of bulls to them and heifers to the hobby farmers.’’

The group was among the first exhibitors at Lardner Park and has built a permanent shed and yards at the site over the years using volunteer labour.

“We ran guess-the-weight competitions and introduced the Murray Grey sausages, turning over 1500 sausages across the four days,’’ John said.

“We would have a mix of commercial and stud cattle on display, and the idea was to have the field day display self-funding.’’

The breed was popular with field day patrons due to the quiet temperament of the cattle.

In the early 1980s, the Murray Grey profile was high in Gippsland with bull sales from Lardner Park made to buyers in Sale, Woodside and Traralgon.

“Membership of the Murray Grey Society had peaked at 1200 members with genetics being sold to the US, UK and New Zealand,’’ Mr Tyrrell said.

“The Premier sale was started at Keysborough with the aim of offering elite females and genetics.

“It was later moved to Bendigo, then Albury and finally Wodonga, and traditionally held in the first week of November.’’

Each year, John and Heather, along with other members, would clean out the yards and paint the sale ring white before the Premier sale.

They also volunteered to handle the mail out of catalogues each year, with all hands on deck “stuffing envelopes’’ to reduce costs.

Rising costs forced the Murray Grey society to step away from the National Show and Sale at Wodonga in 2002.

A committee of volunteers, led by John, had their backs to the wall to save it, with a rise in on-property sales and severe drought gripping the nation.

“We cut costs to get back on track but we still had to promote the event so every penny went into the catalogue and advertising,’’ he said.

“The National was selling around 70-80 bulls with the catalogue consisting of two-thirds bulls and one-third females.

“We helped a small team of dedicated volunteers to do the catering at the National and Premier sale to bolster the finances and get back in the black.’’

The couple retired to Tungamah, in northern Victoria, in 2011, with John volunteering as the Tungamah pool and grounds maintenance man, driving the community vehicle and at the Yarrawonga Show. Heather volunteers at the Yarrawonga op shop, while John works part-time at the Mulwala Water Ski Club.

He had served six years on the board of the Victorian Agricultural Shows Ltd, with one year as chairman and in 2015 was awarded life membership. He is also a life member of the Red Hill and Berwick shows, Gippsland Murray Grey Promotion Group and now the Murray Grey Beef Cattle Society.

“We started volunteering in 1983 and haven’t stopped since,’’ he said.

“It gives us a sense of pride and satisfaction – the friendships we have made through volunteering and showing cattle are the most important.’’

John has judged cattle at Sydney, Adelaide and Melbourne Royals and in Tasmania. He has shown many champion Murray Greys at Sydney, Canberra, Melbourne and Adelaide Royals. His greatest achievement was showing the junior interbreed champion bull at Melbourne, Lerwick Park Buckley.

When judging cattle, conformation and carcase are high on his list.

He likes to visually appraise the cattle first then refer to the BREEDPLAN figures for the final placings.

During his years as stud manager, he emphasized a medium birthweight, above average 600 day weight, milk and intramuscular fat percentage.

“I worked hard on milk so the cows could finish their calves off,’’ Mr Tyrrell said.

“I used a nine week joining period to pick up any late cycling females.’’

Mentoring youth through the breed and VAS Ltd events has been important to John to encourage future cattle breeders.

“At this year’s inaugural youth event at the Murray Grey National, it attracted 72 youth ranging from five to 25 years and from all states of Australia – it was a great effort,’’ he said.

“Murray Grey Youth is quite strong and is a bright spot for the breed.’’ 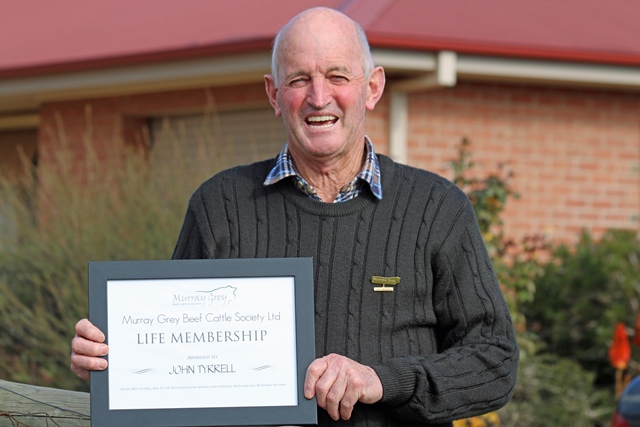 John Tyrrell, of Tungamah, has been honoured by the Murray Grey Beef Cattle Society with a life membership. 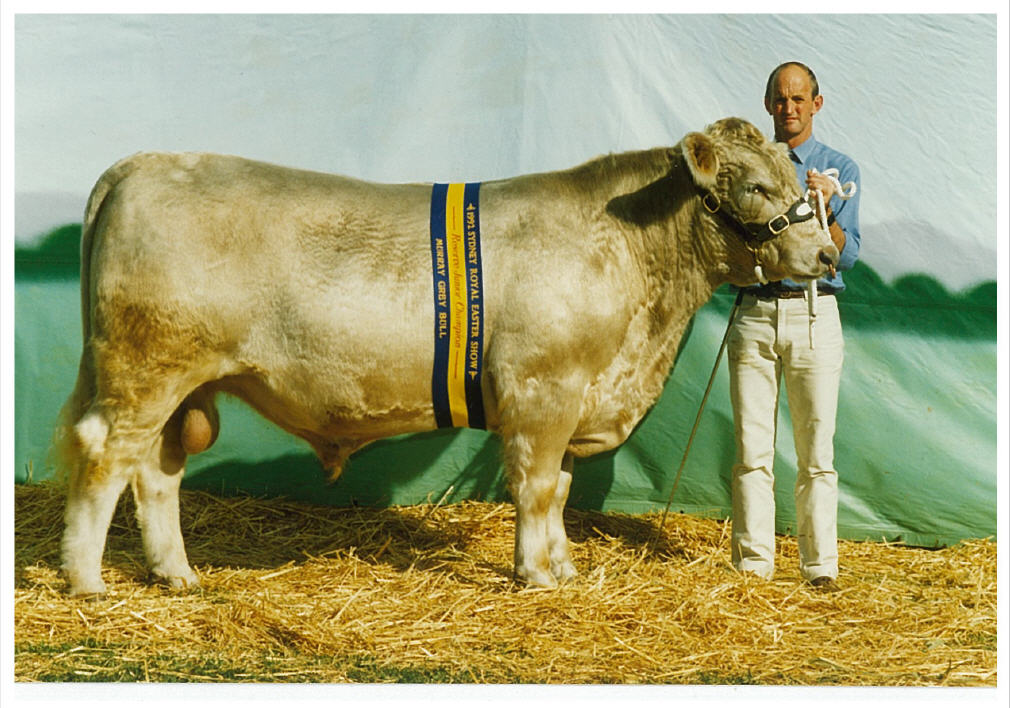 John Tyrrell on the halter of Watermill Playboy at the 1992 Sydney Royal Show. 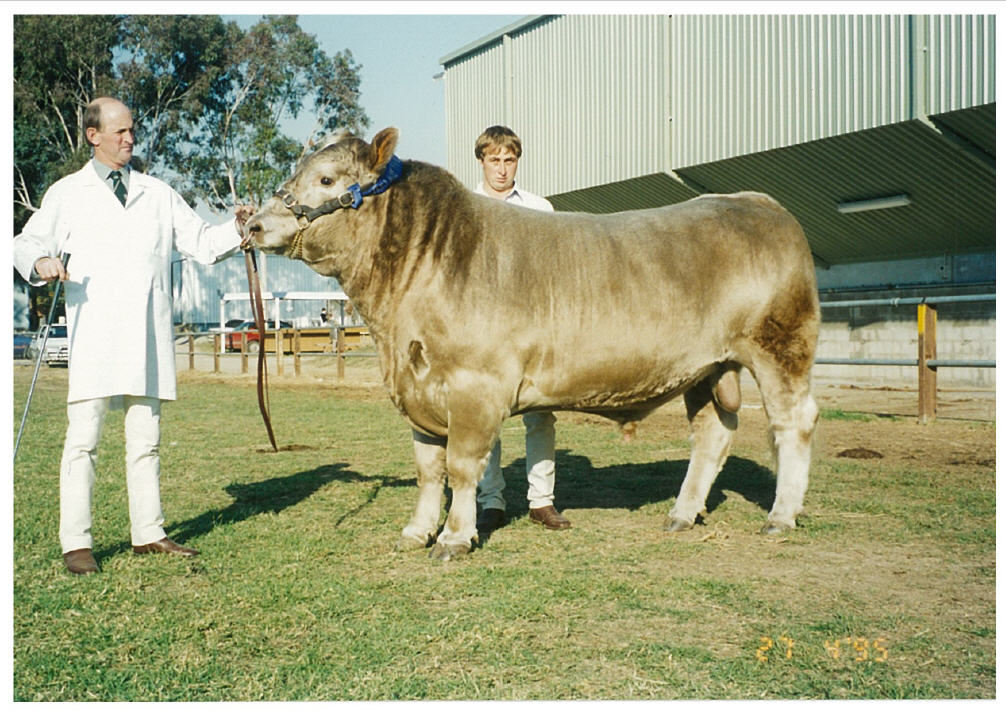