FROM a young age 19-year-old Boyup Brook farmer Harris Thompson had been passionate about the cattle industry.

“My parents offered me a Charolais cow of my own at four years old,” he said.

“But at four I decided I wanted to have my own stud and I wanted it to be Murray Greys.”

The dream became reality when he purchased his first Murray Grey cow with a calf at foot and back in calf.

“I sold the bull calf and doubled the money and it went on from there,” Harris said.

He then coined the “Mighty Murray Grey stud” that has grown to include 30 stud cows.

The family owns and runs a mixed farming enterprise, with cattle, sheep and cropping, including Venturon Charolais stud and is in the process of registering its first White Suffolk stud.

Harris was attracted to the Murray Grey breed because of its temperament and easy doing ability.

“In my opinion a good Murray Grey, like what I’m aiming to breed, is one that is commercially focused and will perform if put into different operations, for example either grassfed or a feedlot,” he said.

“They also have to have great carcase attributes, which is what the breed is known for and has such a good reputation for.”

During his time in stud breeding, Harris has travelled to the Eastern States to compete at shows.

“This year we were at Adelaide and competed in the Murray Grey feature breed classes,” Harris said.

“We thought we would have a go against some of the best in the country and won a class in the junior bull section.

“We have also taken our cattle to the Sydney Royal Show.”

Harris said the family usually showed cattle from the Charolais stud and the Murray Greys.

“At this year’s IGA Perth Royal Show we took home the ‘Most Successful Murray Grey Exhibitor’ title and the grand champion Murray Grey female sash with our cow and calf, plus the Breeders Group of Three in the Murray Grey judging,” he said.

“It keeps you passionate and to know your on the right track.”

Harris wants to grow and expand his stud in the future.

He currently sells six bulls a year and wants to expand this by selling up to 25 bulls annually.

“That would be the ultimate goal for me, to grow,” he said.

While the family runs a mixed enterprise cattle is Harris’s passion.

With the current beef prices he said beef was an exciting sector to be part of, “especially for young people”.

“Agriculture is expanding more and more, with the global population growing we need to feed the world, so we need to produce more and utilise the land and our products,” Harris said.

After travelling to Canada in 2015 Harris saw the benefits of genetics and beef on a global scale.

“We need to improve genetics and weight gains – it all plays a part in the bigger picture,” he said.

“My parents and I went to Canada for a Charolais world technical conference last year and also found two Charolais bulls for our program and we can’t wait to see what the calves are going to be like and what they are going to offer our operation.

“We need to utilise these new technologies and get youth more involved.”

Harris said there were opportunities for more jobs with an increased WA herd size.

After travelling interstate and internationally, he said WA needed to work towards building more interest in the beef industry for young people, which is something lacking at the moment.

“There were 98 competitors at one youth show I competed in,” he said.

“At the Royal recently there was still not that many compared to the east.

“We need to encourage the youth, they are the future.”

Harris said current prices could be a good driver to keep young people in the industry.

“The current dollar, good cattle prices and knowing you can make some money out of cattle and farming, means it won’t be seen as a hobby but a serious profession,” he said.

“Beef is looking up in general and it’s an exciting time.”

Looking to the future, Harris wants to travel to either Canada or England to continue learning new techniques, tools and explore new technology that could be implemented in WA.

“I would like to see how they do it and then bring that back to the farm,” he said.

The fifth-generation farmer is passionate about the industry and wants to continue farming on the family’s 1052 hectare farm in Boyup Brook.

“The only change I would make is to have more cattle,” he said. 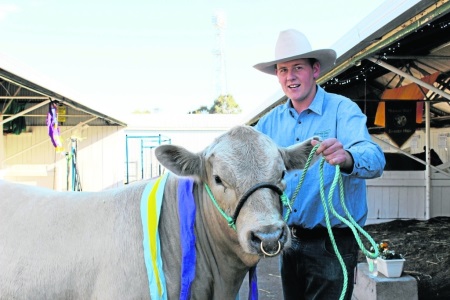