LIGHTNING hit Lyndee and Ashley Severin’s phone line, taking it out for 10 days.

“But we’re back on line now, so it’s fine to talk,” Lyndee said.

“We don’t have mobile phone coverage but we do have satellite internet so we aren’t totally isolated.

“When you look at where we are on a map we are geographically remote, but yes we have bitumen on the road, power from diesel generators, solar and wind, a phone line and thousands of tourists go past in a year.”

This is Curtin Springs Station, a 416,410ha working beef property, 100km long and 40km wide smack bang in the middle of Australia, 85km from Uluru and 360km to Alice Springs.

The Severin family — Peter, who, at 88, still works on the property, and wife Dawn — first came to Central Australia in 1956, establishing a small store with petrol pumps for the handful of passing tourists.

These days the property is diversified. Lyndee and Ashley (Peter’s son) farm about 3500 self-replacing Murray Grey cattle, the only station in Central Australia to do so, alongside agritourism: the 27-room Wayside Inn, restaurant, bar, campground, farm tours of their wildlife corridor and — since 2014 — handmade paper from native grasses collected on the station, sold on-site to tourists.

“People will come in expecting to ride a horse or see a dude ranch, but we are upfront about what we can and can’t do,” said 54-year-old Lyndee, who grew up on a mixed farm at Lockhart in the Riverina.

“We tell them there are no domesticated horses on the property, because we no longer need horses or choppers to muster but use water trapping.”

WATER trapping? Lyndee explained that this method of mustering is just one of the numerous ways they farm differently in Central Australia.

There is no surface water at Curtin Springs Station, with water supplies pumped to the surface, stored in tanks and provided to animals by way of troughs. All water available to stock is located inside seven cattle yards.

A one-way set of traps allows the cattle to freely enter and leave the yards, unless the Severins wish to muster, when they prevent the cattle from leaving, a low-stress method compared to helicopters or horses.

Because cattle can go a few days without drinking, mustering can be a lottery.

This mustering style — and outback conditions more broadly — determine many of their farm production methods.

The Severins run a herd of 20 cows on agistment in Casterton, western Victoria.

Generally these cows receive artificial insemination from Murray Grey or Belgian Blue semen, as well as a mop-up bull. Although this year they are using just the bull. Joining is in May/June for an April calving.

WEANER heifers and bulls aged about 16-18 months are transported to outback Australia, where bulls and cows are kept together for year-round calving.

Lyndee said the Murray Greys had proven to be the perfect breed for their farm system — the property is below the tick line — because they have a small head and lower birth weight, which means no problem births. The breed is placid, happy to walk for feed and drink, and mother’s share other calves.

Murray Grey steer will generally weigh heavier and yield better than other breeds.

Lyndee said they did not cull cattle based on fertility, but temperament.

“Fertility is important but not the most important. Ultimately an animal needs to cope in the landscape,” she said.

The Severins even maintain barren cows as “maiden aunts”, overseeing weaner paddocks and teaching them to grow up away from mothers.

There’s also a 16-year-old bullock in the steer paddock teaching skills of how to get water and go up the race.

The climate means they have few problems with parasites, with the main focus on branding, marking and ear tagging, with the occasional animal treated for horn problems (although increasingly they are using polled genetics) and pink eye.

THE most difficult aspect of farm management is the feral camels, which in 2009 took out 140km of fencing in six weeks.

“But a single number doesn’t mean a lot. We had 30 inches after Cyclone Tracy and it was not a good season. In 2010 we had 19 inches, with about one inch of rain every fortnight over the year and it was the best season in living memory,” Lyndee said.

There are seven major land types and 22 sub types, which all produce a different combination of grasses, shrubs and trees.

Lyndee said they do not renovate pastures or use supplementary feed.

“Right now we are up to our knees in herbage but no grass. It looks amazing — fluorescent and emerald green — but it’s native grasses that give longevity,” she said.

When grasses finish, cattle feed on shrubs and trees, such as mulga, “which doesn’t fatten them, but they hold”.

So what is a typical mustering year?

In a perfect world, Lyndee said, they would turn over in excess of 1000 head a year.

MOST cattle either go direct to slaughter at Teys in Naracoorte, South Australia, or to the feedlot market, based on stock agent demand. At times livestock is sold at the annual July sale at Alice Springs.

Lyndee and Ash — who was a Nuffield scholar — have six children, with one working on the property, alongside two staff. The tourism business has 17 staff.

She said while the tourism paid the bills, money from the cattle went into improving infrastructure and paying down debt.

Lyndee met Ash at the station when she came to work there in 2003.

“I get asked whether I get sick of it but no, not at all. Every day the landscape is different. The big landscape is impressive but it’s the little stuff here that makes it work.” 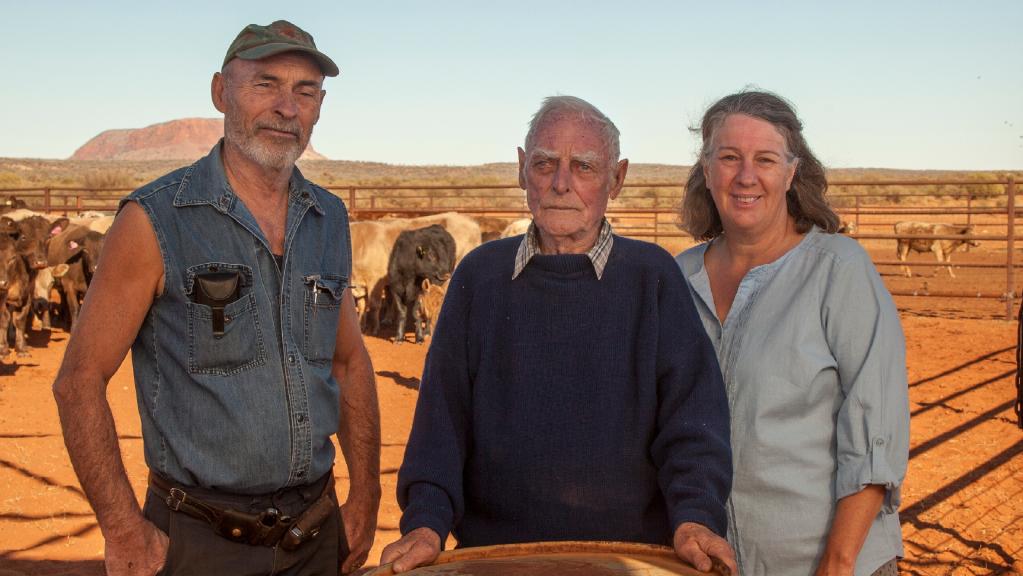