Strong family dynamics are combining with an efficient production system and Murray Grey genetics in southern NSW to hit the grid specs every time.

The cattle are grazed on a pasture base of phalaris, ryegrass, cocksfoot and subclover in the 1000mm rainfall zone on undulating granitic soils.

The herd is accredited under European Union, Meat Standards Australia and the JBS Farm Assurance programs.

“Our steers are grass finished at a whole of life average daily gain of 1kg to an average of 450kg by 18 months of age,’’ James said.

A mixed sex consignment under the JBS Farm Assurance Program averaged 283kg carcass weight, had an average eye muscle area of 72.6 sqcm and an average MSA Index of 60.4 at a grid price of 451c/kg.

“Our goal is to produce a quality product, responsibly and ethically, that meets market demand and that we can be proud of,’’ Robyn said

Calves are weaned into small holding yards at nine months of age for seven days, and supplied with clean water and silage.

Run in mobs of around 300, the calves average 240-250kg liveweight, and are vaccinated and drenched.

The next step is to add a Bovilis MH + IBR vaccination at weaning as a preventative to respiratory disease in the feedlot.

“We understand how important Bovilis is for weaners in confined spaces, under stress and adverse weather conditions – it also comes down to supplying what the customer wants,’’ Robyn said.

The family was among the early adopters of Murray Greys commercially, grading up from an Angus base in the mid 1960s using foundation bloodlines from The Glen.

Impressed with the quiet temperament, they found the Murray Greys attracted a premium price on the lucrative Japanese B3 market for their intramuscular fat.

Maiden heifers are classed on frame size and structural correctness, with the average frame score being six.

Heifers are naturally joined at a critical mating weight of 320kg plus to calve at two and a half years of age. A split calving makes additional use of the bulls.

“This year we rejoined the dry females after pregnancy testing to build our female numbers, otherwise they would be sold,’’ James said.

Cast for age cows were sold recently in the physical market to average $1350. The average age of the herd is seven years.

James, 33, was a practicing accountant until returning to the family beef enterprise with his wife Gemma.

“Expansion is the key as it leads to longevity,’’ he said.

“Labour efficiency is critical here as we use few subcontractors and do the stock work, fencing, sowing and spraying in-house.’’

Plans are in place for future expansion to enable cow numbers to increase to 1000.

To achieve the weight gains, pastures are top dressed with 125kg/ha of single super and the hay paddocks receive 300kg/ha of Pasture Boosta in spring.

In the past, lucerne pastures have suffered from lack of persistence but a new summer active variety will be trialled this year for hay production and grazing.

“The success of our operation is having a good family relationship – the family dynamics are strong,’’ Robyn said.

“We have always known the Murray Grey is good – back in the 1980s and 90s we achieved a 20c/kg premium over other breeds in the Japanese B3 market.

“The EU market gives us the best returns for our steers. Females are supplied into the grass fed domestic grid for optimum returns.’’

“We could do things a little differently to push the system – we are not putting in grazing cereals as we have to be strictly grass fed without any grain,’’ he said.

“Purchased hay must be either lucerne or pasture – there are a lot of checks and balances, especially with chemicals and farm safety, and everything documented.

“All cattle are identified with electronic ear tags with weights, heath treatments and reproductive data entered on a computer at the yards.’’

The family has invested in new sires each year at the Murray Grey National Show and Sale, paying to a top of $7000 for around 10 led and unled bulls over the past five years.

Bulls are assessed on their Breedplan figures in the catalogue then visually appraised at the sale.

“In recent years we have diversified our bloodlines to increase 600 day weight and utilize hybrid vigour,’’ James said.

“Bulls are selected on birthweight (for heifer bulls), 600 day weight, and feet and leg structure.’’ 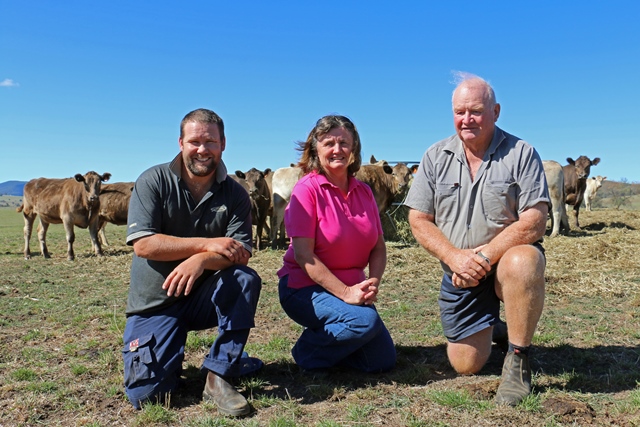