Flavour and tenderness wins over consumers

Butcher Ben Kurrle demands grassfed or grain assisted carcasses 200-220kg, with a yield up to 70 per cent and fat cover of 5-6mm.

Mr Kurrle said consumer repeat purchasers and positive feedback on eating quality, tenderness and flavour of the grassfed Murray Grey beef had encouraged him to use the breed to differentiate the shop in a competitive retail market.

“I never set out to be a specific Murray Grey shop, it has evolved that way,’’ he said.

“It helps us provide something different outside of Angus and Wagyu.’’

Mr Kurrle is impressed with the improvements in carcase quality, softness and temperament of Murray Greys over the past decade.

He said a large proportion of his customer base were young families wanting secondary cuts for convenience meals.

“There has been a shift away from primals to mince, stewing steak and sausages,’’ he said.

“The arrival of the slow cooker has been the biggest thing to happen to the retail trade in the decade with value added casserole cuts in high demand for curries or meat balls.

Mr Kurrle ages the Murray Grey carcasses for a minimum of 10 days.

When it comes to primal cuts like porterhouse and eye fillet, he prides himself on quality not quantity.

“When the hide is taken off, the butcher is driven by yield but for the consumer it all comes down to flavour and tenderness,’’ Mr Kurrle said.

“If a steak is tough, (the consumer) will never get to the flavour conversation as they won’t buy it again.

“I don’t have that problem with Murray Grey beef.’’

Mr Kurrle has worked closely with the Gippsland Murray Grey Breeders Group at the Farm World field days, Lardner Park, for the past two years.

This year, he donated 1500 sausages at the field days on April 7-10 to raise funds for the group’s activities.

Group members Melinda Kent and Chris Siekman, of Labertouche, have supplied steers and heifers to the butcher shop for the past 18 months.

The cattle are finished on ryegrass, clover and native grasses to 400-420kg liveweight at 14-15 months of age, and processed at Radfords, Warrugal.

The carcasses dress on average at 56 per cent and weigh 220kg with an average rump fat depth of 4-5mm.

The autumn and spring calving herd is run across two properties at Labertouche and Pakenham.

In the past, the family supplied steers to small lot owners who sought the Murray Greys for their quiet temperament and ability to finish to bullock weights off grass.

Heifers were in demand from peri-urban farmers running three to eight head.

A 16-month-old purebred heifer weighing 430kg and named Candy was displayed at this year’s Farm World field days, then processed at Radfords and sold through The Meat Safe.

“We provide social media, an email and phone contact network, and written information on such topics as calving, genetic selection, drenching, castrating, vaccinating, weaning and joining.

“Murray Greys were the first cattle breed to exhibit at Farm World in the 1970s.

“We are only one hour from Melbourne so we tend to find Murray Greys have won a reputation as the quiet, gentle breed among the small lot owners.’’

“I am now breeding for compact cattle which finish quickly, are structurally correct and can handle the soft country,’’ she said.

“Consumer feedback tells me the beef has the right meat and fat colour, has eye appeal, eatability and flavour, with customers continuing to come back.

“Providing the beef meets the specifications required by the butcher and is to my expectations, then I’m happy.’’ 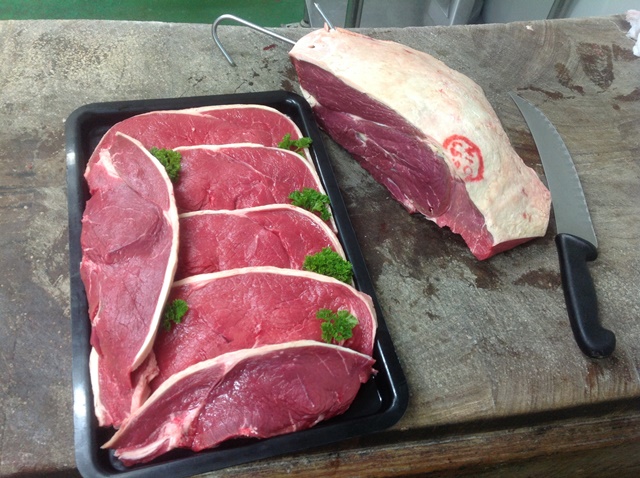