A seven-month-old Murray Grey heifer took out the interbreed supreme title at this year’s Maitland Show.

Judges Dean Taylor, Scone and Tyson Will, Delungra said the heifer was the most complete animal in the ring.

“We might be looking into a crystal ball in regards to this heifer but we both think she will become an outstanding Murray Grey female,” said Mr Will.

“The moment she entered the ring you knew you were looking at something very special.”

She is a daughter of Wallawong Rip Snorter and took home the Allan and Joan Ball Memorial Trophy.

Before taking out the supreme title the Beroleanne had won the junior championship in what the judges described as outstanding line-up of heifers.

The junior champion interbreed bull was another Murray Grey exhibit the 15 months old Rouchelle King of Hearts. Excited by the Richards family, Rouchel. The bull was a son of Rouchelle Yuppie. 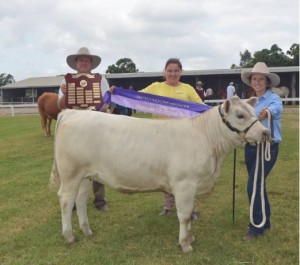