A TOTAL of 46 lots and 42C – the Southend Murray Grey bull sale was a scorcher on all fronts clearing the catalogue to excellent values at the stud’s on-property bull sale last week.

A double top price of $10,500 was paid for two hefty and meaty grey lads which went to long-term Southend clients.

Behind the Wire, Esperance, paid the sum for lot two and BA & LD James, Kalgan, secured lot nine for the same top price.

At 914 kilogram, Southend Kohan K785 (a Wheelview Finn PGB F21 son) caught the eye of Gers Gerschwitz, Behind the Wire, Esperance, due to its sheer volume and capacity.

“After 21 years buying at Southend we have always found the bulls to perform exactly as predicted,” he said.

“We chose this bull because he is an outcross to our existing Southend genetics and he is extremely soft with outstanding fleshing.”

Aside from the bull’s genetics, Mr Gerschwitz utilised the EBVs and scan data to confirm his visual selection of the bull and Kohan had an EMA of 114cm2 (based on its previous weight of 762kg) with 12mm for P8 fat, 8mm for rib and 5.2 for IMF.

The Gerschwitzs sell their calves through a premium market with the majority going through premium beef label Butterfield Beef, Borden.

Another long-term client put their hand up to the tune of $10,500 and Bryan James, BA & LD James, Kalgan, made sure he took home his first pick securing Southend Kenny K757 for the equal top price.

Having bought Southend bulls for 16 years, Mr James knew what he was looking for in his new sire which was purchased in partnership with Graham Bell, Collier Park stud, Porongorup.

“We inspected the bulls before the sale and instantly liked him,” Bryan said.

“I missed out on his full brother last year so I made sure I got the bull I wanted this year.”

The sire will be used by Mr James over a select group of females to breed replacement bulls.

Continuing through the bull section of the catalogue, $6750 was paid for lot three, Southend Kenith (AI), by AG Hambley, Brookton, while Nangarup Farm, Padbury, paid $6250 for Southend Kane.

Demand for young females was strong and in the registered stud females buyers paid up to $1550 with RP Bass & KR Pinch, Boyup Brook, buying two at $1550 and another at $1300.

In the commercial females, six lots of five heifers were snapped up and HP & LJ McKenny, Bow Bridge, paid up to $1400 for his lot while DJ & KM Smith, Katanning, paid $1300 for his group of five.

Elders auctioneer Gary Preston congratulated the Wise family on the presentation of the bulls and said it was the best line-up he had seen at the sale.

“With a total clearance of the catalogue it was an excellent result and fantastic to see support from all over the State from long-term and new buyers,” he said. 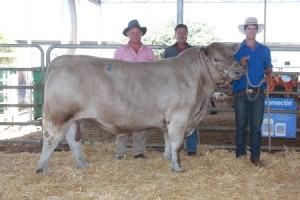