A ‘golder’ field from dairying to beef

It is a far cry from their dairy farming beginnings in Kalgoorlie, but Max and Bev Pollard’s Murray Grey herd has been roaming Gibson farm land for the past 30 years.

And there is no stopping them from continuing to run the Murray Greys which have been bringing home the bacon (or should we say steak?) consistently for so many years.

“Too many people chop and change the breeds they run,” Max said.

“I tried a few different things, but once I found something that worked, I stuck with it and the results have been positive.”

Max and his wife Bev moved to the 800 hectare (2000ac) property in Gibson in 1976 from Kalgoorlie when it became clear the new direction the dairy industry was headed wasn’t conducive to producers giving it a go in the Goldfields.

“The highs and lows of the season in Kalgoorlie are obviously very different to the conditions in prime dairy country and the new regulations made it virtually impossible for us to achieve the quotas set by industry,” Max said.

“So we had to shut up shop.

“We’d already had the farm in Gibson for about 10 years before we moved here because we were using it to stock our heifer calves from Kalgoorlie and to grow most of our hay for the dairy.

“But we decided to give beef a try so we moved down permanently with the 300 Friesian cows we had.

“I put blacks over them initially but eventually I got rid of them and I bought in the Murray Greys which I’ve now had for 30 years.”

Max said the reason behind the choice of the Murray Grey breed was simple.

“The Murray Greys were what was around at the time,” he said.

“There were also Herefords but I didn’t like the look of them and they had some eye issues.

“The Greys are a nice looking cow with very similar traits to the Angus breed which is obviously so popular.

“They also have an edge on the blacks with their excellent temperament which was the main reason I made the choice and I’ve been happy with my decision.”

In the early days Max attended the annual Invitation Bull Sale at the Knutsford Selling Complex in Kojonup to source genetics for his Murray Grey herd.

Now, the herd includes Tullibardine and Bundaleer bloodlines and, more recently, genetics from Monterey and some Eastern States studs.

But over the years Max noticed the bulls he was buying in were taking a while to get used to the Esperance environment and often briefly dropped in condition before becoming accustomed to the area.

“I got frustrated with buying bulls that were too used to getting special treatment so I started to breed my own,” he said.

“Here I only feed with oaten hay and pastures.

“I need my bulls to be able to do well without any grain boost.

“So for the past five to six years the bulls we use have been reared on-property so I know what I’m getting and can be sure they can handle the feeding regime here.”

The only exception to Max’s relatively new breeding policy, is the recent introduction of a couple of Shorthorn bulls, brought in to improve frame and calving ease in the Murray Greys.

“I’ve found the Shorthorns have smaller heads when they’re born and are a bit finer in the shoulders which is a great addition to the traits of the Murray Grey calves,” he said.

“I also think the mothering side of things has improved a bit since the inclusion of the Shorthorn blood.”

When it comes to joining, Max runs at an over-ratio of two or three bulls to 50 breeders.

In an attempt to cover all bases, one bull goes in before the others in early May, with the other two bulls joining the effort about three weeks afterwards.

Joining lasts for seven weeks meaning calving is all over by early February with weaning taking place in the yards in November.

Pregnancy testing is only carried out on the heifers which will only be given a second chance if they display desirable traits.

Otherwise, the heifers not in-calf will be on the truck with Max selling his culls and weaners to wherever the best price is.

“It depends on the year and the market,” he said.

“But I’ll usually sell either to feedlots or at the Mt Barker saleyards.”

Max and Bev plan to just keep on farming their Murray Greys as the herd continues to provide a good return due to competitive prices.

“What you see is what you get,” Max said. “The Greys are just a quality cow and that’s good enough for me.” 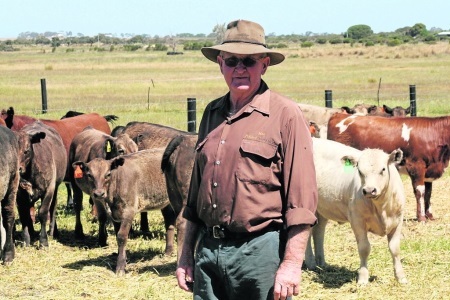