WAYNE  and  Karen  Hegarty have come a long way in a short time.

Five years ago Wayne was a slaughterman and butcher, working for farmers in his mobile business.

Spying a business opportunity, the couple then bought a 20ha property in South Australia’s Adelaide Hills, transforming the dairy into an accredited meat processing and packing room.

Nearly three years after launching their Carnevore online meat sales brand the Heg­artys have cornered a niche market and, based on current figures that double every year, are already looking to expand.

Currently they farm 100ha over three properties, farming 100 “grassfed, chemical free” Murray Grey and Angus cattle, but buying beasts from three neighbouring farmers to double that number. “Given the growth of the business we’re currently farm-hunting so we can raise the majority of cattle and double the processing room up to about 80 square metres,” Wayne said.

“We are also getting a lot of demand for lamb so the aim is to add in sheep to the mix.”

Underscoring sales growth is not only the “grassfed, chemical-free” farm philosophy, but also their niche in selling bulk carcasses.

Selling only online, customers have a choice of two products: a side of beef, currently valued at $10.95/kg, which means an upfront fee of about $1100-$1200; or alternatively a quarter of beef for about $650.

Wayne breaks down and packages all cuts, from eye fillet, and bolar roast to chuck, mince and sausages, then delivered in their mobile coolroom in a radius of about 50km.

IN AN economy of rising meat prices, the bulk branding alone has earned them media coverage, including on TV’s Today Tonight program two years’ running. “We are trying to re-educate people about the benefits of bulk buying. Nowadays it’s all about convenience, going to the supermarket, finding what they need and paying top dollar,” Karen, 48, said.

Such is their growth and focus on marketing their Carnevore brand they have even developed a line of merchandise, such as stubby holders,
tea-towels and aprons.

“We even give away a set of free steak knives to every new customer,” she said, adding they plan to develop a premium supermarket line in 2018.

“It’s all about people standing around the barbecue, eating our meat and associating it with first class beef.”

Wayne, 52, is a third generation butcher, an old-school qualified slaughterman and butcher, who had his own shop before becoming a mobile business in 2004 — No Bull Processing — which he still operates.

After seeing what farmers were achieving in private meat sales the Hegartys had the idea to buy their own property, determining to make it “clean eating” after Wayne was diagnosed with bowel cancer two years ago.

As such, the couple uses no synthetic fertilisers or herbicides on their properties, trialling organic methods, including spreading dried chook manure (750kg/ha) across pastures, as well as GoGo Juice.

“Whatever you feed your animal, you are eating yourself,” said Wayne, who has now recovered from his illness.

PASTURES are renovated with clover and perennial ryegrass and they cut their own hay, rather than buying in any supplementary feed.

Sandy loam paddocks get an annual average rain of 860mm and are rested for more than a month, with mobs rotated about every three days.

Because of the fertility of the land, they believe “it’s about the feed, not the breed”, but add that Black Angus and Murray Grey are the best for eating quality.

Carnevore has three calvings per year, with Black Angus bulls hired from Powell Livestock Management and joined with both Angus and Murray Grey heifers and cows.

Given the herd is still growing, they buy in cattle every year, depending on need.

Even though he has no farming background, Wayne said the eye of a butcher was equally as skilled. “I’ve killed enough in 37 years of butchering to know what I’m looking for.”

He said the No.1 factor in quality beef was ensuring a low stress environment.

“People don’t realise how important it is, but having a stress-free animal is massive.

“Once you get adrenaline in the meat it compromises its quality, it goes dark and tenses up.” As such, Wayne handles the stock regularly, not using a motorbike or quad and getting them accustomed to him.

THE abattoir, Two Brothers, is a 15-minute drive from their farms.

While the Hegartys have drenched cattle, they hope rotational grazing eventually reduces the need.

It takes about 12 months to reach their optimum weights, based on grass feeding, compared to seven-eight months for grain-fed. At 390kg live weight (200kg dressed weight) animals are sent to slaughter, returned to the farm for processing within 24 hours and hung for three weeks.

Karen — with a background in financial management — has worked with US website designers to drive traffic through their only sales outlet, using such tools as Google adwords and search engine optimisation.

The couple, whose two sons Heath and Scott help on the farm, said they moved into farming with relative ease, thanks to the advice of local farmers.

“I’ve always handled cattle and been around farming. Now one of my favourite things is to sit on the back of the ute with the cows and have a beer.” 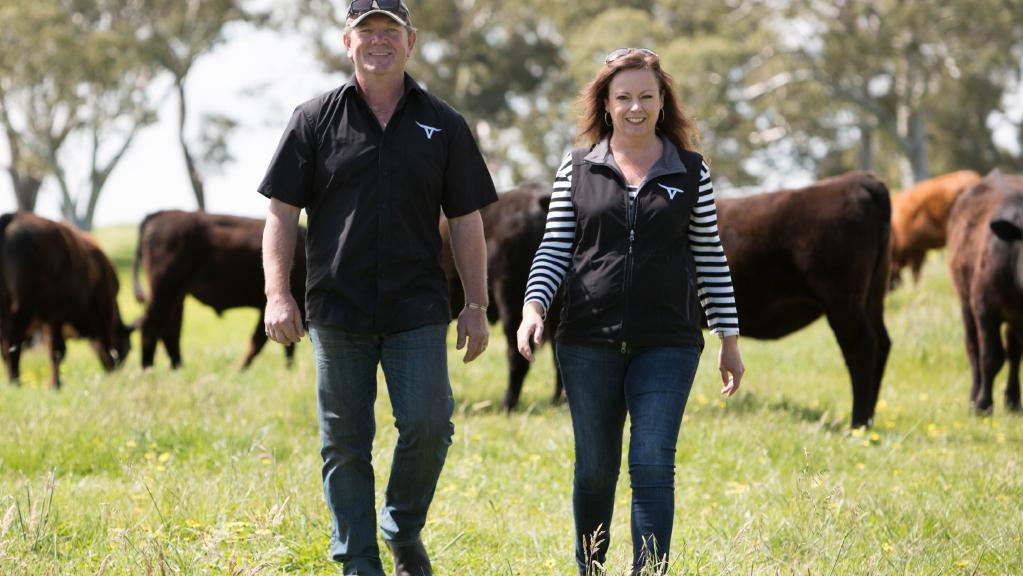