Four decades of producing Murray Grey cattle at ‘The Briars’

By Hannah Powe
Courtesy The Land

TEMPERAMENT and ease of handling is an important selection factor for Murray Grey beef producers.

Richard and Josephine Martin, Hoskinstown, near Canberra, have been breeding Murray Greys since 1977 on their 348 hectare property, “The Briars”.

Murray Greys are selected for their temperament, doing ability and because they are easy cattle to handle that fit well in their country.

The Martins have 100 purebred breeders that are joined to Murray Grey bulls purchased from on-property sales or the Wodonga National Show and Sale.

Bloodlines used include Woodburn, Monterey, Michaelong and most recently Ayr Park, to name a few of the studs the family has purchased bulls from.

Animals are grazed on winter oats and pastures consisting of phalaris, cocksfoot and ryegrass. Oat crops are grazed and baled for hay to be used on-farm.

Mr Martin said new bulls were the only bought-in stock.

“Replacements are selected on their type and if they make a certain weight and are ready to join,” he said.

“Cows are kept as long as they are still producing and feeding a calf and doing all right. We had a 21-years-old cow that still produced a calf a year up until she was 19. Some fall apart earlier, it depends on the beast.”

Calves are yard weaned at seven months or older, targeting the weaner market with some calves going through the yards, others being sold privately and more recently, they have sold through AuctionsPlus.

“We are new to AuctionsPlus but we are quite happy. The animals don’t need to move or do anything till they are sold which is easier on us and less cost,” he said.

“Advantage is assessors come and look at the cattle to set a price. Running a sale pen into auction means you have to take what is offered because of freight factor.”

The family previously sold through Goulburn saleyards but have now been selling at the South Eastern Livestock Exchange, Yass.

Steers bred by the Martin family have been successful at Canberra Royal receiving first place in the purebred section and a reserve champion in the hoof section. 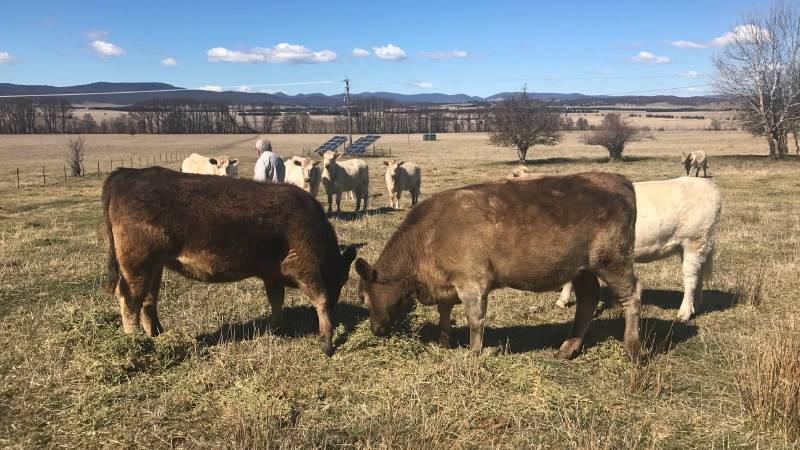