A local stud owner has taken out a top cattle prize at the Royal Melbourne Show, with one of her bulls judged the best of its breed.

“It’s probably nice to know my breeding program is heading in the direction the industry is looking for, and it really cements the fact that the work put in at home, the effort we put in… is paying off,” she said, adding that it was an “absolute thrill”.

Judge Dianna Wood said of Lionel that his depth of body, spring of rib and hindquarter were “fantastic”.

Mrs Hazeldene said that while her preparation for shows usually involved trying to put weight on her animals, the good season meant a bigger problem this time around was keeping weight off.

While Lionel had previously won champion bull as a nine-month-old at the Bendigo show and came third in the interbreed at Deniliquin, Mrs Hazeldene said she had not expected the awards.

She said Lionel, to her, was a bull that looked good and displayed good carcase qualities, so she was just glad that judges saw the same qualities.

With a major accolade secured, Lionel will now go up for sale next April at the Murray Grey National Show and Sale in Wodonga.

It was Mrs Hazeldene’s third time at the Melbourne show, as she usually opts to do local agricultural shows.

She has operated her Marong stud since 2006.

After finishing university, she had planned to work as a jillaroo in the outback, but she had no experience with cattle.

So she approached a local farmer to undertake some volunteer work, but in doing that, fell in love with the farmer’s Murray Greys.

She said she loved Murray Greys for their gentle nature and their personalities, and from a business perspective, the quality of their meat and their easy calving. 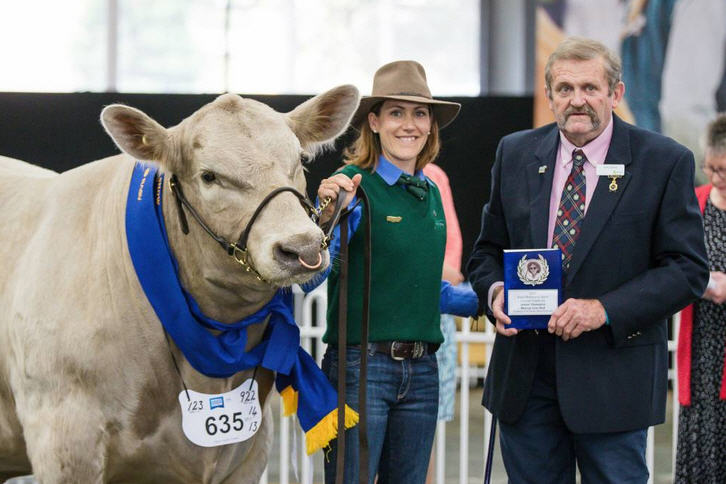