HAMISH Maclure of Tarcutta has an enthusiasm for the beef cattle industry that runs deep.

He understands the supply chain and the importance of quality seedstock genetics. It is this depth of understanding and a keenness to see see the industry develop which allowed him to win the Murray Grey Youth Junior Ambassador Award.

The year 7 Yanco Agricultural High School student is grateful for the lessons he has learned about the beef cattle industry so far and has also expressed a willingness to give back and share knowledge too.

In his ambassador application he expressed his interest in the Murray Grey breed, at a commercial and stud stock level.

“It is important to share information for the industry to continue to grow and be strong. For this to happen young people need to be supported, this is why Murray Grey Youth is important.”

In addition to showing Murray Grey cattle Hamish and his family have an interest in showing steers too.

“This year we have two Angus steers, which have been very successful during the autumn season,” he said.

Hamish said he was looking forward to upholding his role of Murray Grey Youth Ambassador.

And he had already established contacts with schools and young people in the industry so he could share knowledge and ideas.

“I will promote the Murray Grey Youth events to my contacts at school and at the Wagga Wagga Christian College and Harden Murrumburrah High School,” he said.

“I have become friends with the Harden Murrumburrah school cattle team through competing against them at the local shows,” he said.

In addition to holding stud stock knowledge Hamish also demonstrated, in his application, that he was across the broader issues affecting the beef cattle industry.

“There is a lack of young people wanting to go back to the family farm when they grow up,” he said.

“I am going to school at Yanco to learn as much as I can about agriculture so I can take this back to the (family) farm,” he said.

“The beef industry needs young people to be involved and make sure it continues to be strong into the future,” Hamish said. 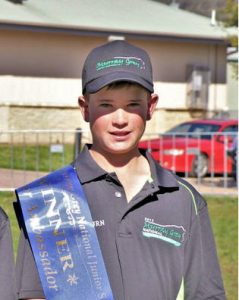