Murray Greys have dominated the nation’s largest grassfed carcase competition by grading in the top 5 per cent on the Meat Standards Australia Index for eating quality.

Phoines Pastoral won the highest MSA eating quality award with an MSA Index of 65.38, ranking the steer in the top five per cent of the nation on the grading system.

The MSA Index is a single number and standard national measure of the predicted eating quality and potential merit of a carcase.

Billed as the largest grassfed carcase competition in Australia, the Classic drew a record 722 entries from South Australia’s mid north and south-east, and Victoria’s western districts.

The cattle were largely British and European breeds and their crosses, including Murray Grey, Red Poll, Angus, Hereford, Simmental and Shorthorn.

Beef producers were required to enter a minimum of 10 animals, which were allocated to classes based on carcass weight, fat depth and dentition, with processing taking place between last October and February.

The Edge family entered 37 steers, selected from the progeny of their 1000-cow autumn and spring calving herd.

This was attributed to management, nutrition and genetic input focusing on weight for age, adequate fat cover and marbling.

“We are always looking at the kill sheets and take the results on board,’’ Mr Edge said.

“If everyone hit the MSA grid it would be terrific but that doesn’t always happen so there is always something to learn.

“The win gives us confidence we are on the right track with this breed of cattle.

“We have been breeding Murray Greys since the 1960s for temperament, doing ability, ease of management and flexibility in the market place.’’

When it comes to bull selection, Mr Edge relies on his bull providers, The Glen and Lindsay studs, to breed the right mix of carcass and fertility traits.

“Murray Greys do a good job meeting the MSA specifications off grass with their marbling and temperament,’’ he said.

“They are consistent with their fat cover and are easy to keep.

“They are good doing cattle – we have had quite a few tough seasons and we don’t supplementary feed.

“The Murray Greys’ carcase attributes means it has a natural propensity to meet the grid.

“These cattle were straight off grass and given no special treatment.’’

The family paddock weans their calves at seven to eight months of age, or 260-300kg liveweight.

In the past, steers were sold as vealers but are now finished on ryegrass and clover pastures to 660-670kg liveweight, and processed at Teys Australia’s Naracoorte plant.

Surplus heifers are grass finished for the European Union market.

He is also pleased the competition raises funds for the Royal Flying Doctor Service.

“Teys do a wonderful job with the producers and it is a good way to get feedback on the cattle,’’ he said.

Competition chairman Allan Kain said a total of 88 per cent of the entries, or 640 cattle, met the minimum MSA specifications.

Seven per cent failed for having a carcass pH of over 5.71 while the remainder failed for less than 3mm rib fat, inadequate fat distribution or more than a three for meat colour.

Of the 640 cattle meeting the MSA compliance, they had an average MSA index of 60.6, ranking in the top 25 per cent of cattle in Australia.

The top half of these cattle achieved an average MSA Index of 62, placing them in the top 10 per cent for eating quality.

Mr Kain said a changed format with a longer delivery window resulted in the record number of entries. 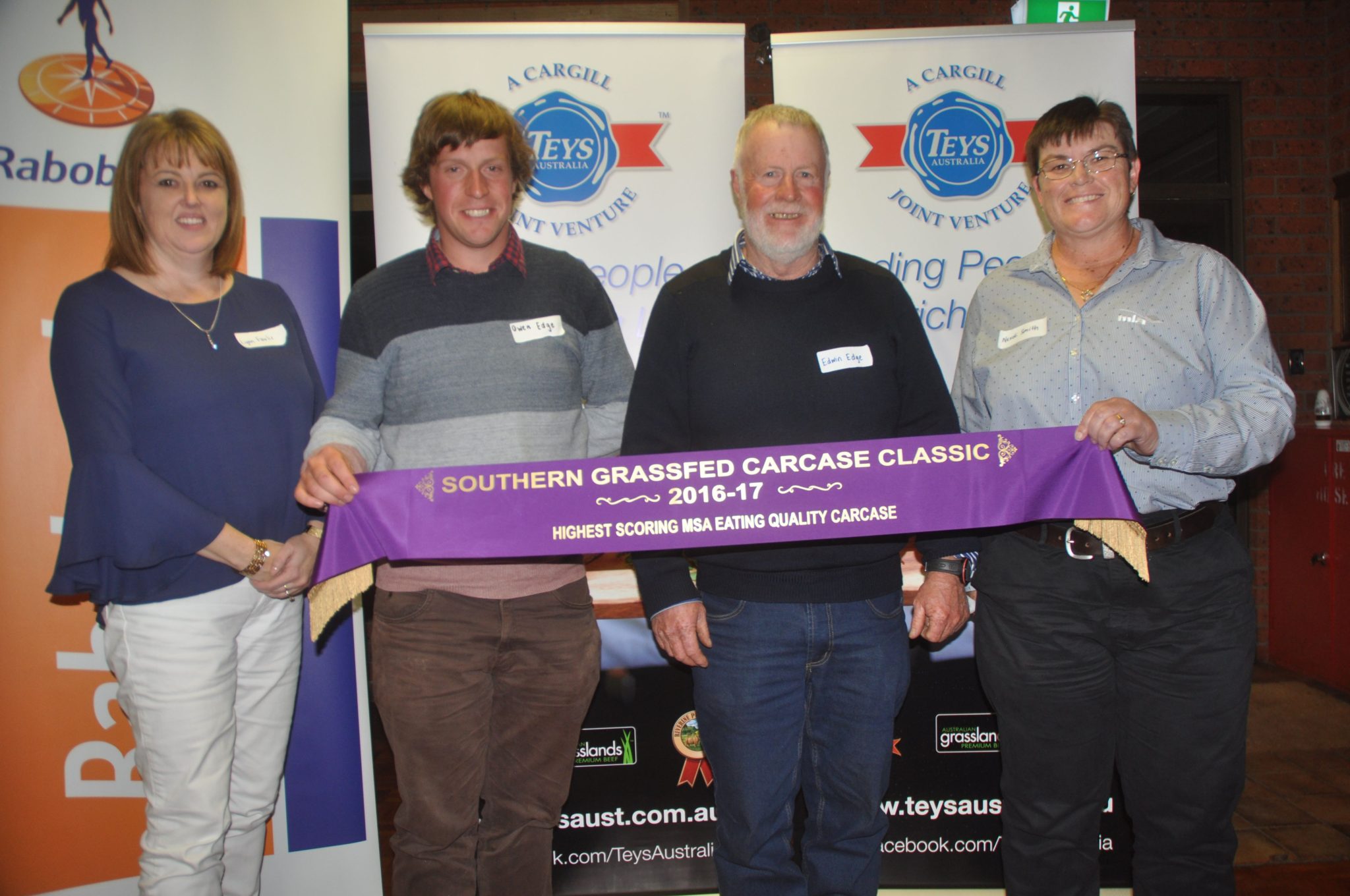