WAROONA cattle producers George and Daisey Brown, will help raise awareness of the Black Dog Ride when it offers up an outstanding Murray Grey steer at the Muchea Livestock Centre on Tuesday, September 26.

The Browns will donate the proceeds of the steer to the organisation after they received support from Black Dog riders and also Williams producers to repair and replace fences on their farm after it was burnt out in the 2016 Waroona/Yarloop bushfire.

The Murray Grey steer, which is bred from Monterey bloodlines, will weigh in at close to 600 kilograms and is rising two-year-old.

Black Dog Ride State co-ordinator Ray Sherry, Williams, who was one of many to lend assistance, said the Black Dog Ride was trying to raise $200,000 to train local volunteers in emergency services and defence in mental health first aid so they can recognise and respond appropriately to their colleagues which may be in crisis, under a program called “Even Heroes Need A Hand”.

“This year we have organised a 9000km round trip to Tasmania which will depart in October as part of the fundraising,” Mr Sherry said.

“On the ride we talk to schools, return soldiers, ambulance workers, SES volunteers and firefighters about the program.”

Also as part of the fundraising effort by the Browns, Mitchell’s Transport is donating the transport of the steer to the yards free of charge and both Elders and the Muchea Livestock Centre are waiving any selling fees.

Mr Sherry said the organisation was very grateful of the donation from George and Daisy and also that of Elders, Mitchell’s Transport and the saleyards for allowing the steer to be sold without any cost.

So buyers if you want to support a good cause and make a difference to your local community make sure you get a along to the Muchea Livestock Centre on Tuesday, September 26 and bid up strongly. 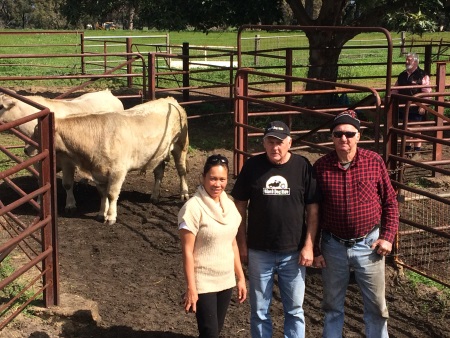