The students, from Fukuoka College of Agriculture, were studying a range of agricultural industries including beef, goats and horticulture and also visited a Merrigum dairy farm and a tomato farm as part of their trip to northern Victoria.

At Dajory Murray Greys, the students were able to view cows and calves, joined heifers and one of the herd sires, Dajory Dynamic, who is now nine years old and a trait leader in the breed.

The students were interested in hearing from Carolyne and Josh McRae about the stud’s breeding program and irrigation system, and they were particularly keen to find out about sale prices.

Student Kota Fukamachi was impressed with the size of the Dajory cattle, and his classmate Kishin Kitano said they really appreciated being able to tour such a large operation because access to Japanese farms was much more tightly restricted.

While at Concorde Park, which has recently been acquired by Dajory Murray Greys, the students were also able to see some Rhiannon Park standardbreds that are housed there and being prepared for the yearling sales in Melbourne.

Blanche Poole, the stud owner, discussed training and daily routines with the students, who were then able to pat one of the yearlings.

However, when asked to name the best thing about their tour, the students quickly explained that the night sky was much larger than in Japan, where it is obscured by city lights and buildings, and they were delighted to have seen shooting stars. 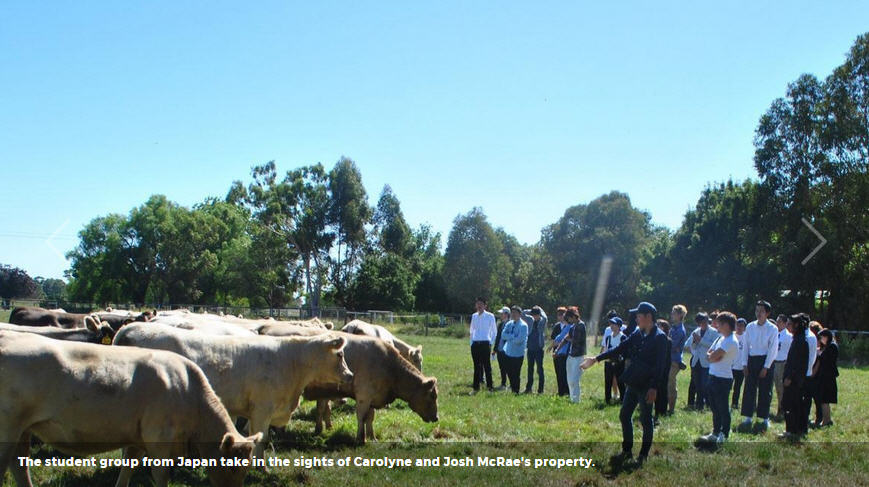