By Ruth Schwager
Courtesy The Land

BULLS reached a high of $10,000 and females topped at $3250 twice at the 20th annual Wallawong carcase quality sale at “Marriot Park”, Gunnedah on July 13.

Nineteen of the 23 Murray Grey bulls offered by the James family sold for an average of $5421 and nine females averaged $2361.

Repeat Wallawong client David Schouten, “Dunrobyn”, Gravesend, bought the top bull, paying $10,000 for Wallawong Zeppelin, a 24-month-old son of Wallawong Quarterback and Bundaleer Impost E4. The bull weighed 855 kilograms, had an eye muscle area (EMA) of 130 square centimetres, intramuscular fat of seven per cent and rump and rib fat of 16 millimetres and 12mm. He had a scrotal size of 37cm and had estimated breeding values (EBVs) of +35, +54, and +77 for 200-, 400- and 600-day weight.

Mr Schouten will use the bull in his commercial herd, which focuses on the supermarket trade.

​“I was looking for the carcase qualities and to have his EMA, fats and marbling combined is very rare.”

Among the volume buyers were Neil Mansfield, Gulgong; Damon Horsburgh, Tottenham; and the Haley family, Mebul, who each purchased three bulls, and Mr Kidd, who took home three females.

“A lot of our clients are focusing on producing heavy supermarket cattle that are efficient, finish off grass, and have high yields,” Mr James said.

The sale was settled by Fleming and Ross, Gunnedah, with auctioneer Paul Dooley, Tamworth, taking the bids. 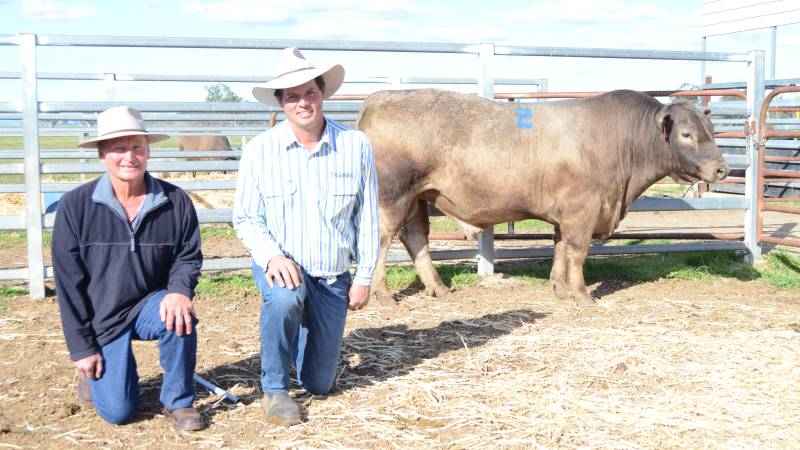