Beefing up profits with Murray Greys

THE Norton family, Narrikup, made the move into Murray Greys 20 years ago when they were looking for a change of cattle breed.

Having run Herefords for many years, Chris Norton said that breed had experienced a reduction in demand from the market and a change was needed.

“I had nothing against the Hereford breed, but other breeds were simply making $40 more a head in the saleyards, so we decided we had to make a change,” he said.

Chris now farms with son Jarrad, who is the fourth generation of the Norton family to farm the Narrikup property, and said they switched the herd to Murray Greys because the breed had a good reputation for temperament and performance.

“Running quiet cattle is important for us,” he said. “It makes things so much easier to manage them if they have a good temperament.”

The Nortons started their Murray Grey herd on Tullibardine and Southend bloodlines.

The purchase of more land not long after the change of breed saw the need to expand numbers and so the Nortons bought in 100 Angus-Friesian females.

This brought some black influence into their herd, with Murray Grey bulls used over these females and the odd black calf still comes through now.

These days the Nortons predominantly use bulls from Alastair and Jenny Murray’s Tullibardine Murray Grey stud, which is situated just down the road from them.

“We like the fact that we know these bulls perform in our environment and we have a good relationship with the Murrays,” Chris said.

“I like to breed cows with middle of the road frame size, so when buying bulls I look for a frame score 7.

“We like bulls with smaller heads for ease of calving and milk and growth rate figures are also important.”

Chris said calving ease was a trait they also selected for.

“Murray Grey cows tend to have a smaller calf, but the calves get up and get going quickly,” he said.

“We are getting a 35 kilogram calf on the ground and then they get growing.

“This is also why we look at milk and growth rate figures when buying bulls so that we are optimising that growth early in the piece.

“Jarrad and I will use Estimated Breeding Values as a guide when buying bulls but at the end of the day I still like to see what the bull looks like and will select on that.”

In terms of management of their cattle, the Nortons now run a closed herd carrying a proportion of heifers through each year as replacements.

About 50-70 heifers are kept a year, with the herd size sitting at 400 breeders.

“We calve in the middle of February with the calves weaned off their mums in early to mid-January,” Chris said.

In the past the Nortons supplied calves to the Lester family when they were lotfeeding at their Manypeaks property.

The Lesters have since stopped lotfeeding, but the Nortons still look to supply to other feedlotters in the area.

Most of this year’s calves will probably go to Alastair Murray, who runs a feedlot on his property.

“We have supplied many calves to Alastair over the years,” Chris said.

“It works well for us because we don’t have to freight them too far and Alastair likes to see how calves from his bulls perform, so it is a good arrangement.”

As Chris says, the performance of calves also depends on how good the season is, and this year was a tough one in the Narrikup area.

“It was a tough winter and we were lucky we had lots of hay on hand from the year before because we had to feed out quite a bit this year to keep the cows in condition,” he said.

“Despite the winter, we had a reasonable spring and the calves have come through quite well and we also managed to get some good hay crops, which we weren’t expecting given the way the winter went.”

In addition to their cattle herd, the Nortons also run a 2200 ewe flock, which provides a good spread of risk in their farming operation.

“We shore 4500 sheep this year and it is handy to have them in the mix, particularly this year with the way wool prices have gone,” Chris said.

Given the near record sheep and wool prices, the Nortons say they won’t be tempted to reduce cattle numbers and increase sheep numbers just yet.

“If I wanted to change things I could get rid of 50 head of cattle and maybe carry our wethers through for another year to get an extra wool clip off them, but I think things are working well at the moment,” Chris said.

Jarrad said if they change anything within the operation it may be to make it more intensive or look to diversify into something like horticulture.

“We have done some preliminary numbers on installing a centre pivot and using irrigated country to increase our stock numbers, but I am not sure we will go down that path,” he said.

“The only way to expand is either to buy more land or intensify, and when you look at land values in this area, irrigation is probably a cheaper option to increase stock numbers than buying another farm, but again it is something we have looked at but may not go ahead with.”

Jarrad said he was keen to bring another income stream into the operation though and is looking at trialling a small plot of garlic to see how it goes.

“I will do a small-scale trial initially to see if we can grow it and if it is viable, but beef and sheep will always be our main focus as it has worked well for the family up to this point ,” he said. 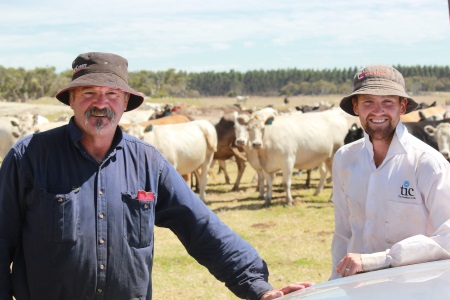