Grahamvale stud Dajory Murray Greys will be involved in Beef Week for the 10th time this year as it celebrates the 20th year of the stud’s existence.

To mark the occasion, the McRae family will be involved in the 2018 Heifer Challenge and those who attend the open day on January 31 will go into the draw to win a semen package.

‘‘One lucky visitor will receive a semen package on the day,’’ stud owner Carolyne McRae said.

In addition to the heifers competing in the challenge, the McRaes will also have sale bulls and a select number of cows and calves and joined heifers on display.

When the McRae family started the stud, they chose Murray Greys because they had young children at the time.

‘‘This is the 20th year of the stud and when the first lot were purchased, the kids were quite young, so we went with Murray Greys because of their quiet temperament and and ease of handling,’’ Mrs McRae said.

‘‘We have stuck with them ever since.’’

The stud started from embryos from The Glen, Lindsay and Willalooka studs and now has Dajory bulls and genetics across the country.

‘‘Now they are buying bulls or genetics from us,’’ Josh McRae said, in reference to the studs from which Dajory began.

‘‘We have sold bulls and genetics to every state of Australia as well as Canada, the Falkland Islands and New Zealand,’’ he said.

‘‘New Zealand can’t import live animals so they have had to import semen and genetics,’’ Josh said.

‘‘Murray Greys are gaining more popularity in the last 18 months … particularly those starting out with an animal interest,’’ she said.

Mrs McRae said there were plenty of benefits to being involved in Beef Week.

‘‘It’s a good day for people to get an overview of the operation and see the dams and the size of the herd.’’

The Beef Week open day, on January 31, will be held at the McRaes’ new property, Concord Park, at 70 Knights Rd, Grahamvale 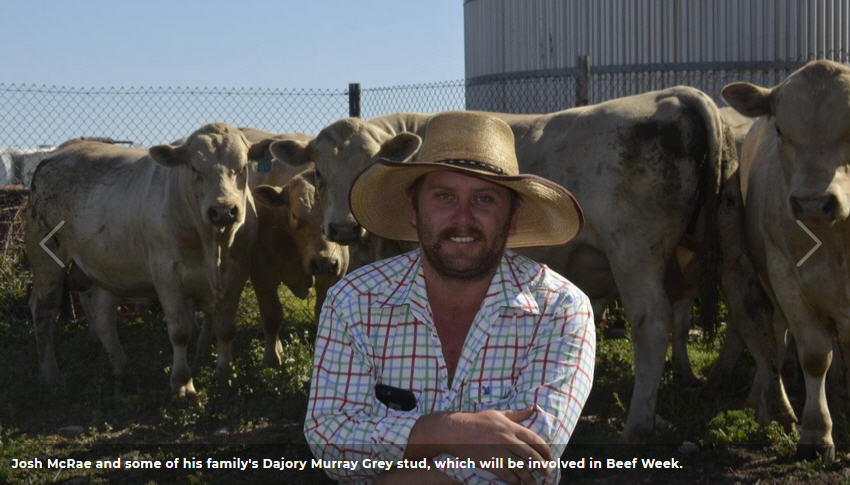