JASON and Alida Parke have an obvious pride in their cattle and equally obvious is their passion for hard work and achievement.

The couple run Lake Muir Prime Beef near Lake Muir, a sprawling land-holding surrounded by a national park, wetlands and nature reserves and encompassing some historic pioneering property taken up in the 1880s.

They were featured in Farm Weekly three years ago just as they were launching into full stride after taking possession of the property as part of Alida’s father Bessel Hanekamp’s farm succession plan.

The farm had been leased out for 15 years and 800 hectares of pine plantations were a major revenue source over their 30 year life span.

Since then they have started to take the reins at Jason’s parents Les and Bev’s adjoining farm, giving them 2085ha in a district marked by the amount of native bush and absentee land owners.

At that time the property was carrying 400 Murray Grey and Murray Grey-Charolais breeding cows and they were in the process of expanding the herd to 600 in readiness to stock country where the pines were to be harvested.

In December most of the smaller 300ha plot had been felled and later this year the final 500ha plantation will be harvested and they will begin building the breeding herd to 1200 head to achieve what they believe will be their full carrying capacity.

An early part of their productivity was to erect an impenetrable boundary fence to keep out feral animals, in particular, kangaroos, after they realised the extent of their pasture losses due to their grazing impact of the kangaroos.

While that fencing program is ongoing it has been relegated to one of their periphery projects and they are dedicating more focus on their core business to breed the best young grassfed cattle possible for the finisher market.

It is a goal that hasn’t changed but how they do it, is something that has.

Recently Alida reviewed a five year plan put in place after they took part in an agriculture department initiative encouraging farmers to become more resilient in drought and adverse times, and they feel it was so successful in helping them achieve goals, they will do another to set directions for the future.

The plan addressed more than just drought survival and was a big inspiration to them not only for increasing productivity but also giving them reassurance and the confidence they can manage adversity in whatever form it takes.

As a result, it changed their entire outlook on many other aspects of their operation that less directly influences production, but are still important in day-to-day operations.

For example, they now:

– Have implemented a fire plan for both farm and homestead.

– Have ramped up farm bio-security, proactively testing the herd for Bovine Johnes disease, meaning they will still hold the highest JBAS8 accreditation after June 30 next year.

– Re-building their stock yards to a standard that is ahead of its time in terms of safety and convenience.

– Are working to conserve more fodder for hard seasons.

The incentive to complete the plan was a matching grant of up to $20,000 to buy equipment or machinery to help with implementation.

They bought a mower and started a big silage and hay program and for Jason it was the first new machinery item they had ever owned.

“We always had the attitude that you don’t spend money on machinery,” he said.

“You put it into fencing, yards or fertiliser or something else to increase productivity.”

They also added an old Versatile tractor to the machinery shed.

In 2016 they cut 1000 cubic metres of pit silage and 1200 rolls of hay and with the exceptionally dry winter they fed cattle for six months and used nearly their entire supply.

They have also found productivity can come in some unusual guises.

One of Jason’s mates told him about a 10 tonne crane going for a “song” at a gold mine and before they knew what they would use it for they snapped it up for $2000 and trucked it home.

“We were using old tyres to hold down the plastic silage covering and it was time-consuming to pull them off to uncover the pit for the next few days’ ration and because they were usually full of water it was wet, heavy and hard work for Alida,” Jason said.

“We bought 10 rolls of rubber conveyer belting (each 150 metres in length and weighing five tonnes) and cut it into lengths to use it as covering.

“We just hook onto a length and use a vehicle to drag it off with no manual labour required.

“It is quick, easy and efficient but there was no way we could have handled those rolls without the crane.”

Silage is now a major part of the Parke’s drought-proof plan.

Its suitability for long-term storage is insurance that ticks the peace-of-mind box.

“We don’t know what next season will be like – nobody does it is a matter of being prepared,” Alida said.

“If you are prepared for it you just manage it and cope with it as it happens.”

With silage production, paddock renovation has become an elevated priority.

They have had consistent success sowing silage paddocks with a mixture of Wicher ryegrass and oats because of its ability to handle all soil types and water-logging conditions.

It is the only form of cropping they do and it gives the opportunity to clean up paddocks a process they will repeat gradually across the farm.

Bringing the plantations back into production is a new farming chapter but one that won’t be achieved quickly.

The area represents some of their best grazing land and they are planning to burn the residue in autumn 2019 enabling them to start a program of lime and fertiliser.

They are hoping the roots will rot sufficiently after five years so they can rip the stumps out without disturbing the ground excessively or needing an uneconomical amount of horsepower to move them.

As part of their fire action plan, they will strategically graze boundary paddocks adjoining forests and absentee landholders, in an aim to reduce fuel load with cattle rotated in other paddocks later in the autumn.

They also are designing a series of broad laneways that will not only make cattle movements easier but will also be the area on which they will graze the sheep they plan to reintroduce for diversification.

They are trialling a series of productive fire-retardant tree species such as olives, syzgium and feijoa to plant along the laneways to form a natural firebreak.

The district’s sparse population combined with an annual rainfall between 600 and 700mm means there is a substantial spring flush and few people available to take quick action in the event of fire.

The location of the homestead means they have no escape route from their property that doesn’t require travelling a long distance through bushland or plantations, and several fires already this year has them on high alert.

Replacing the stock yards has been elevated up the list of priorities and a hotch potch of temporary portable panels holding up the original rough-hewn wooden yards gradually are being replaced by steel panels constructed by Jason.

They also will be capable of serving as sheep yards.

The main working section of the yards is finished and everyone from truck drivers – who like the swinging gate at the end of the loading ramp – to vets and handlers – who no longer need to work in the heat or rain – appreciate the protection from the elements.

Alida says they have aimed to build a design that is ahead of its time and will comply with occupational and safety standards she believes all cattlemen will have to adhere to in the future.

The main loading ramp, handling race (incorporating a Queensland-manufactured RPM crush) and working area is under cover, and they have installed extensive LED lighting and hot water.

As testament to the property’s age, they had to cart in 200 cubic metres of free-draining coarse sand to replace the eroded pen floors.

In the next few months Jason will build a dedicated weaning yard and receival yards to complete the project.

The herd structure recently has undergone some fine tweaking with Alida setting up a 120-head nucleus of their best pure Murray Grey cows from which they breed replacement females to join to Charolais sires.

The offspring are then joined back to Murray Grey sires to give a nuggetty calf with a slightly higher fat level for ease of finishing.

After initially setting up the nucleus any further selections for this sector will come from the general herd only after the cows have reached four years of age.

This year they joined 580 females and when they pregnancy-tested recently they finished with just 36 “dries”.

The good result was mainly because of improved heifer calving achieved by running them better, introducing low birthweight Angus bulls and keeping them close to the yards so assistance could easily be given should they need it at calving time.

“We still have to keep increasing our breeding numbers but we have reached the stage where we can afford to be even more selective than we have in the past.

“We really want it to be quality rather than quantity in everything we do.”

As the herd has progressed Alida has felt confident enough with the standard to retain a small group of bull calves as back-up animals.

The Murray Greys are now based on Monterey, Melaleuca and Tullibardine bloodlines, and Charolais sires were originally sourced from the now dispersed Denmoore stud.

When forced to find an alternative they decided on the Newdegate-based Quicksilver stud and Alida says she is loving the change especially as feet is one of their most important selection criteria.

Knowing their origins as a European breed that didn’t need to walk too far, she is pleased Quicksilver studmaster Doug Giles has sorted out the foot problems for their Wheatbelt environment.

“And they are quiet,” Alida said. “We base all our business on growing for the fattening market and quiet and content cattle grow fat calves.”

They start turning off their young cattle once they reach 350 kilograms selling from mid-December over several months with each load sold under the Lake Muir Prime Beef label, highlighting the importance they place on good customer relationship and the desire to present calves that will bound ahead regardless whether they are finished on grass or grain.

“People are familiar with the name and with the new weaning pens and Johnes disease-accreditation, buyers will have even more reassurance,” Alida said.

Because they sell exclusively through the Mt Barker sale they receive little processor feedback and for this reason they have welcomed the opportunity to be part of the Paddock to Plate competition run at Albany.

They have entered one or two teams every year and find the year-in, year-out information they compile is a good indicator of where they are tracking comparatively. 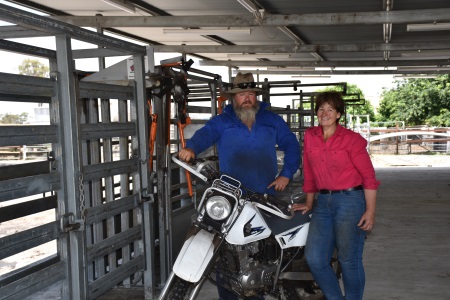 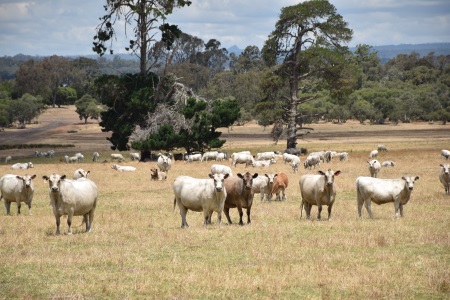