IF you are looking for soft-coated, silver Murray Greys with plenty meat and growth, then you need look no further than the Southend Murray Grey stud at Katanning.

Southend stud principal Kurt Wise’s aim is to breed a true 100 per cent Murray Grey with the main focus being from conception through to consumption.

“We want to breed an animal, with a soft, silver coat, a good carcase, fertility, growth and calve with minimal complications,” Kurt said.

“As I strongly believes this is the type of animal that suits our diverse environment, industry demands and will further the stud, its clients and the breed.

“I am very happy with the genetic progress that we are making with the bulls and our female herd going from strength to strength through all aspects from conception to consumption.”

Close to half of the bulls catalogued in the stud’s sale team this year have been bred through the stud’s extensive AI-mating program.

“Using AI has been a very influential tool as it has allowed us to bring in new genetics and use old outstanding home-bred genetics that are not available to use naturally,” Kurt said.

“We go through every cow in our herd and match mate then to a bull that has a higher potential to improve aspects where the cow is lacking or correct any faults.

“By doing this we have been able to achieve a more uniform and quality line of cattle.”

Kurt said the past 12 months had not been great in Katanning, season wise, with below-average rainfall and long periods of dry through the winter and spring, but despite this the sale team was looking good.

“With a slow start to the year the pastures started on the back foot and were very short right through winter and into the early spring, however we were surprised and very impressed with how the cattle performed, the condition they finished up in at the end of spring was pretty good.”

Once again as a result of its extensive breeding program the stud will offer a genetically diverse line-up of 40 bulls (including five rising 12-month-old bulls), 10 stud registered heifers and 40 unregistered heifers in its on-property sale in Katanning on Tuesday, February 6.

Twelve sires will be represented in this year’s bull sale team and it will also feature the last drop of sons from the stud’s very influential sire Southend Braveheart.

Kicking the sale off for the Wise family in lot one will be Southend Mean Machine.

Kurt said Mean Machine was a great example of the breed with a medium frame, good temperament and very sound bone structure, along with natural thickness, depth and very sound black feet.

“He has outstanding fat cover, IMF and EMA and I highly rate this Southend Hulk son,” Kurt said.

Mean Machine was used in conjunction with another bull for three months in a mob of 57 cows and 56 of these cows are PTIC.

Another bull sure to catch the eye is the 790kg Southend Marty in lot four which Kurt said was very sound with a great combination of length, depth, thickness, growth, and softness making Marty very balanced overall.

“He is out of a 2yo heifer that has done a good job and he also has good fat cover and a good IMF which shows that he is easy doing,” Kurt said.

Next up in lot five will be the 854kg Southend Malit which Kurt described as a powerful, long-bodied, meaty bull which shows good growth for age.

“He was one of the heaviest bulls at all of the weighing stages and his dam is a tremendous big, deep productive cow and is one of our most outstanding young females with her first calf selling for $8000 last year,” Kurt said.

“Overall he is an outstanding bull with sire potential.”

Southend Mark in lot eight is another bull which won’t disappoint.

Kurt said the 706kg Mark has been an outstanding calf from birth until now with an eye catching outlook and a straight topline.

“His dam is a good female with good milking ability and sound feet,” Kurt said.

“We used him in a mob of 43 commercial cows for a three month period and he still impressed at scanning recording good fat cover and the equal highest IMF.”

All Southend stud cattle on offer have had 7in1 and Pestigard injections, drenched with Paramectin and have tested negative for Pestivirus following ear-notching.

All sale bulls have also been semen-tested. 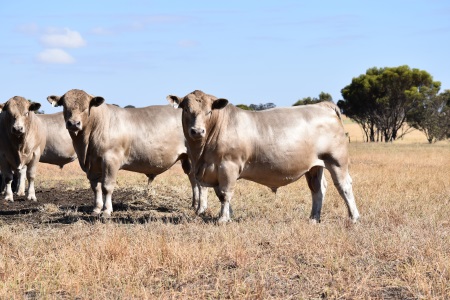