A big crowd of buyers and onlookers again turned out to the purpose built yards at the Gingin Recreation Centre to welcome original and new sale vendors and the top line-up of bulls the sale is renowned for.

The sale was again interfaced on AuctionsPlus and the quality catalogue of 72 bulls representing five British and European beef breeds from nine vendors, drew widespread support from across the State.

When the sale got underway there were 40 buyers on the books from Pemberton in the south to Geraldton plus the Eastern States registered and they bid strongly on the bulls that best suited their requirements.

While some vendors enjoyed solid sales with both good prices and clearances, selective buying in some breeds saw a number of bulls overlooked.

Like most sales this year the average and gross figures were back with the average down $1028 and the gross dropping by $27,500 but in a positive result for the sale, vendors sold four more bulls than last year and the overall clearance was up by 9pc.

Landmark auctioneer Tiny Holly said the presentation of bulls was once again very good and a credit to the vendors and as a result the bulls sold accordingly.

“There was good buying support throughout the sale but at times buyers were selective and with this selective buying the prices came back on previous highs achieved in the past,” Mr Holly said.

“There was good buying support once again from regular buyers coming from the deep south through to north and east of Geraldton and this just shows they trust the sale and the bulls the vendors present in it.

Topping this year’s sale was the Stickland family’s Mungatta Murray Grey stud, Wongan Hills, when its second bull into the sale ring was finally knocked down for $11,500.

The bull, Mungatta Renaldo N28, was purchased by return buyer Shane Edwards, Stockhill Grazing, Quairading, after a lengthy bidding battle with an Eastern States bidder on AuctionsPlus following an opening bid of $6000.

The 796kg, mid-March 2017 born bull was the first progeny of semen sire Michaelong Advance D26 to be offered in WA.

Advance hails from the original Murray Grey herd of the Sutherland family, Barnawarthau, Victoria, who founded and developed the Murray Grey breed in Australia.

Mr Edwards said he saw Michaelong Advance at the Sutherland’s property about three years ago and believed it was the best semen sire at the stud.

“I’ve had an interest in the progeny since and first saw Renaldo at Mungatta in October last year and was impressed,” he said.

“It had the heaviest 200 and 400-day weights and the best muscling in its drop of bulls at Mungatta, with one of the best coats I have seen on a Murray Grey bull.

“It carries most of the traditional Murray Grey traits which can be hard to find on a frame score six bull.

“It has an outstanding disposition and is a clear cut outcross for our herd being the first bull offered in WA by its international semen sire.”

Mr Edwards said the bull will be used largely over female families that go back to his herd’s foundation sire purchased in 2006, Mungatta Explorer.

After a special highlight, things got a little tougher for the Stickland family’s team of 11 bulls with only a further four bulls finding new homes at auction to average $5500 overall.

And while it was a disappointing clearance, the results were improved from last year’s sale where three of 12 Mungatta bulls sold under the hammer to average $5167. 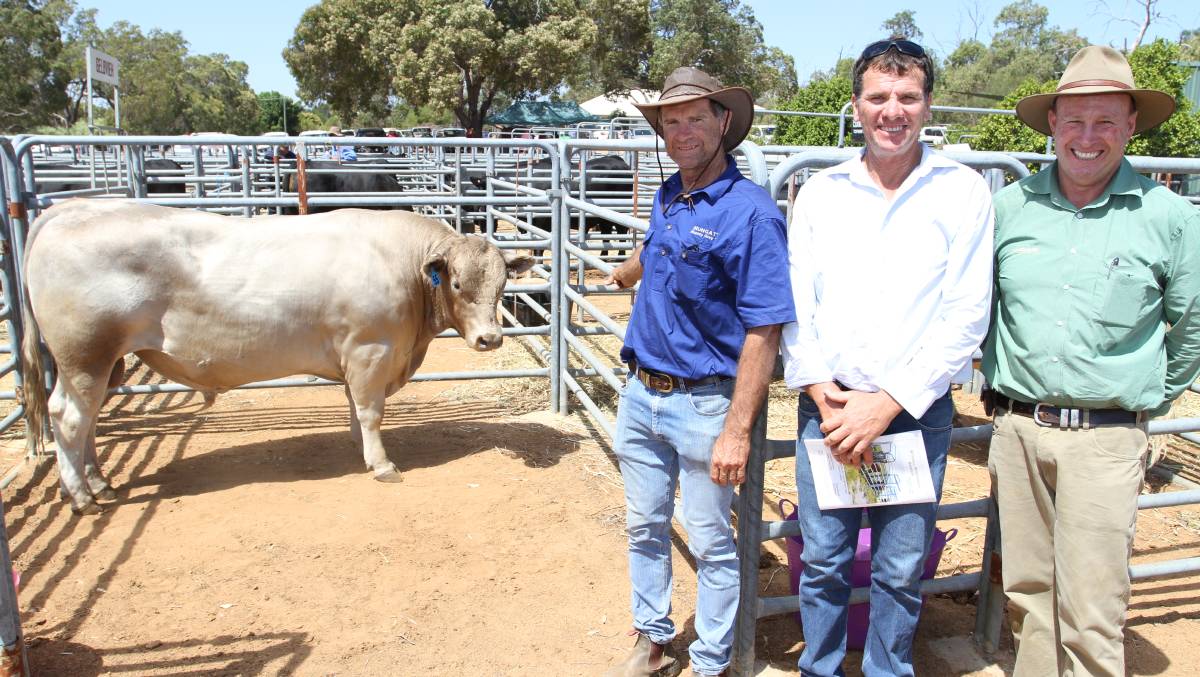