The kid from Jakarta’s slums running cattle on King Island 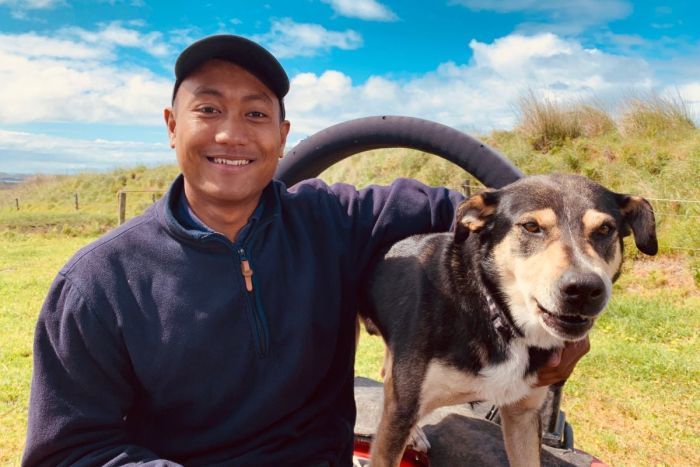 From his quad bike on a farm track with his dog Rufus by his side, Sukma Bowling sees kilometres of pristine coastline and hectares of lush pasture.

There’s not another person in sight.

He helps run a remote farm on the southern tip of King Island in Bass Strait, halfway between Tasmania and Victoria.

The island is renowned for its seafood, cheese and beef.

“It’s quite rugged most of the time and it’s a very windy place but when it’s not windy, it’s the most spectacular place you’ll ever see,” Sukma said.

Sukma admits he doesn’t fit the stereotypical image of a farmer.

“But I always just dress the way I want.”

It is a world away from where the young farmer was born in the metropolis of Jakarta in Indonesia, a city of 10 million people covering two-thirds of King Island’s size.

“I grew up in the slums of [Jakarta] and didn’t get to really see my mother much because she was always working,” Sukma Bowling said.

When he was seven years old, his family moved to King Island, where the population is just 1,200.

“At the time we lived in Bali and a lot was happening in Indonesia,” David Bowling, Sukma’s stepfather, said.

“First was the fall of Suharto and we had riots, then we had the Bali bomb, then the bomb in front of the Marriott in Jakarta.”

The family decided to move back to the safety of David’s home on King Island to provide Sukma with a good education.

At the time, neither Sukma nor his mother, Sumini, could speak English.

It was a shock for Sumini to move somewhere so quiet, with not many people and so few shops, but she now loves to call the island home.

“In my country [Indonesia], you have to lock everything.”

When Sukma Bowling first visited his grandparents’ farm, he couldn’t contain his excitement to see a lawn.

“The first day he was here, he was out on the lawn rolling on the grass because he’d never seen grass before,” Peter Bowling, Sukma’s grandfather, said.

The city kid didn’t expect to become a farmer, but when he finished school his grandfather offered him a job.

He made the usual mistakes: getting tractors bogged and occasionally getting lost on the 2,500-hectare property.

“He knew nothing, so what he knows I’ve taught him,” Peter Bowling said.

King Island life means when he’s not on the farm, he is diving for abalone or crayfish — and it’s easy to find a stretch of coast to surf almost any day of the year.

For Sukma, life in regional Australia is full of opportunities if you have the right mindset.

“A lot of people say, ‘Oh I’ll get bored’, but it comes down to your imagination and if you want to be bored or you want to think you’re bored, that’s up to you,” he said.

The Bowlings have a strong family bond.

Sukma said the best part of farming was spending time with his grandparents.

For his grandmother Evon Bowling, it’s special to see Sukma enjoy his life on King Island.

“It gives me a great deal of pleasure from my perspective to think that we’ve been able to offer Sukma an environment where he’s been completely happy,” she said.

Sukma still visits Indonesia regularly but said he was grateful that he moved to King Island.

“Being over here, it’s an absolute privilege to be welcomed into this family and onto this island.”