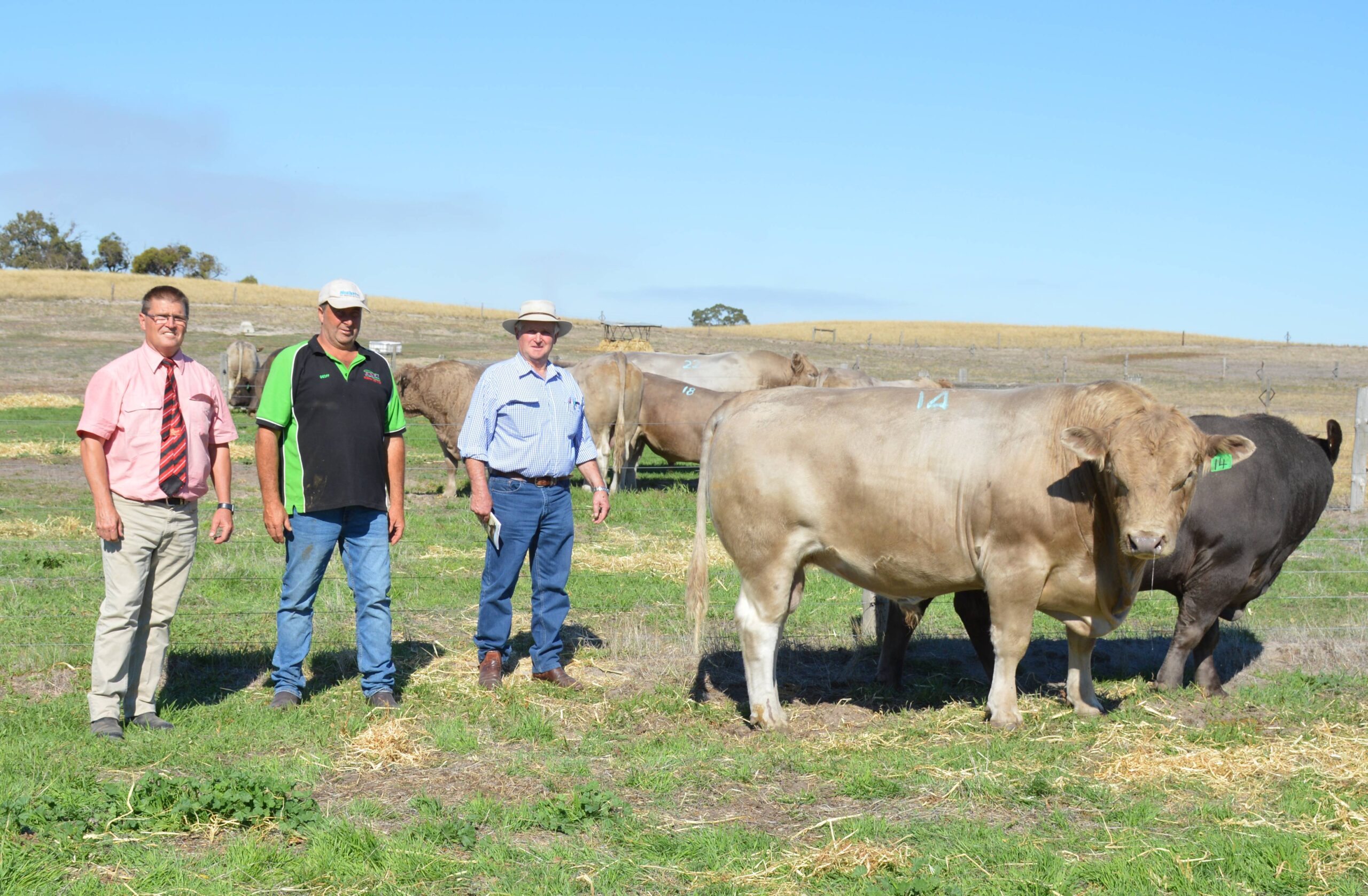 There was plenty of interest from three states in the offering at the Green Triangle Murray Grey sale on Wednesday at Western Flat. During the auction, 17 bulls sold of the 26 offered by studs Arki and Beeamma for an average $5147 and sale high of $9000. The top price was paid by repeat client Bennooka Park Murray Grey, Bega, NSW, for lot 14 – Arki Quiet Assistant Q23. The 802 kilogram two-year-old had a frame score of 5.6 and scrotal circumference of 40 centimetres and ranked among the top 15 per cent for the breed with its eye muscle area and retail beef yield estimated breeding values at +2.6 and +1.6 respectively. While new owner Stephen Robertson was able to look over the bull in person earlier in week, the final confirmation and bidding was carried out by Ken Lewis, Castlemaine, Vic. Mr Lewis said they had been looking for a “impact” sire., with volume and muscle. “This is a fair dinkum red meat machine,” he said. Bennooka also picked up lot 13, in some incredible buying, at $4000. Two-year-old Arki Quick Reserve Q38 weighed in at 768kg, with a 5.9 frame score, a 38cm scrotal circumference and EBVs of +35, +54 and +80 for the 200, 400 and 600-day weight – all within the top 5pc of the breed. In the breakdown between the studs, Arki sold 12 of 17 bulls to $9000, averaging $5416, and Beeamma sold 5 of 9 bulls to $6500, averaging $4500.

Also bidding at the top end, via Auctions Plus, were CP&JM Fisher, Loxton, who paid $8000 for Arki Quiet Time Q26 – a 832kg two-year-old with a 6.1 frame score, 41cm scrotal circumference, with a birthweight EBV of +4.2, 600-day figure of +75 – in the top 5pc – and milk figure of +7, in the top 10pc. GP&RTJ McKinnon, through Elders Mount Gambier, bought two bulls to $7000, averaging $6750. The auction also offered 56 stud and commercial females, which attracted plenty of interest. All five stud heifers sold to a high of $3500 twice, averaging $3280. Both top price heifers – Beeamma Bonnie P38, which had a heifer calf at-foot, and pregnancy-tested in-calf Arki Roma Q21 – were bought through Auctions Plus by David Weidenbach, Mishmar Pty Ltd, Murchison, Vic. Mr Weidenbach also bought two of the remaining heifers for an overall average $3350, as well as the top price pen of five commercial Beeamma heifers, with five heifer calves at-foot, for $3100. The 56 commercial heifers averaged $2522

Also active throughout the female bidding was Neville J Sealey, through Elders Casterton, Vic, who bought 10 commercial heifers to $2700, the remaining stud heifer at $3000 and two bulls at $4000. At the start of the sale, a minute’s silence was held in memory of the founder of the two studs and Murray Grey life member Dick Buick – the father of Arki’s Geoff Buick and Beeamma’s Denise Fabris – who passed away in November. Geoff said the sale and lead-up had been emotional but he was pleased with the outcome. “I know the industry has moved a long way forward in 12 months, but we’ve moved a lot in that time too,” he said. Elders stud stock’s Tony Wetherall, who auctioneered the sale, said all the cattle had presented extremely well. “There was a good depth of quality and genetics throughout the catalogue,” he said. “The type was good and commercial buyers are more active this year when looking for those qualities, softer cattle. The sale will be again conducted by Elders and simulcast through Auctions Plus. On Wednesday 30th March, 2022 at 2pm sa time, offering 26 Bulls, 5 stud & 55 Commercial heifers PTIC or calf at foot.