Southend Murray Grey Stud, owned by the Wise family of Katanning Western Australia, successfully offered and sold all 31 murray grey bulls to a top of $10,500 twice with an average of $5,250 which was up $848 on last years result.

The equal top price was first paid for Lot 2 when Andrew Gerschwitz  trading as  Behind The Wire   Esperance  purchased Southend Kohan WMM K785, with Lot 9 once again achieved the $10,500 price tag when B A & L D  James , Kalgan purchased Southend Kenny WMM K757.

The team leader Willawa Kalan who was sashed Supreme Murray Grey exhibit at the Perth Royal was sold to Mt Barker Transport for $5,250 only to see the next bull into the ring the Reserve Champion at Perth  Royal sell for $5,750.

With an extra bull offered and sold at a top of $5,750 this highly decorated team of Murray Grey Bulls averaged $4,350. 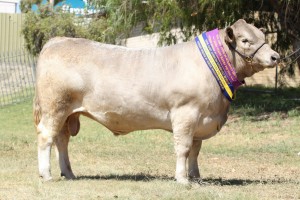 Barker High Murray Grey Stud managed by Norm Hill and his assistant John Wright for the Mount Barker Community College, Western Australia got the Murray Grey Bull selling season off to a great start when the school offered 4 murray grey bulls which sold to a top of $4,750 ,this bull was purchased by Harbour Downs Pastoral Company of Denmark and the team went on to average $4,150.

An exciting  result for the students of the school as a they had prepared and shown a number of these bulls at the Perth, Wagin, Albany and Esperance Shows during the 2015 show season.

By Nick Heydon
Courtesy The Land

Murray grey bulls sold to a top of $5000 while females reached $3750 at last week’s Ayr Park fifth on property production sale at Woodstock.

Ian and Narelle Wilcox, Ayr Park Murray Grey stud, offered 14 bulls which made an average of $3727 and sold to a 79% clearance.

They also offered 24 females which sold to an average of $2195 and which also sold to a 79% clearance.

The $5000 bull was Ayr Park Jedd J38, weighing 896kg and with a scrotal circumference of 40cm, and an eye muscle area of 125sq cm. By Jomal Glen Earthquake E21 and from Monterey Rejoyce D44.

The repeat clients were pleased with the animals they purchased.

“There is never a question about the quality of the cattle”, Mr Gunn Said.

Wallflower was by Monterey Gotcha Z36 and from Ayr Park Wallflower W12 and recorded EBV figures EBV figures of +1.3 for birth weight and +2 for milk. 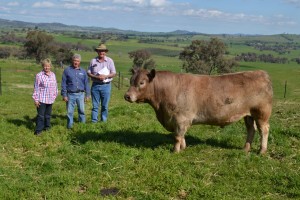 Mr Gilliam was represented by Peter Brazier, GDL, Dalby who said the bull scanned up well, had a terrific back end and excellent weight for his age.

The $6000 second top money also came from the Hansen stable, Shell-Dee Neptune, a dark grey son of Shell-Dee Federation which was bought by Girlie Goody, Malakoff, Monto who selected the bull for his temperament and strong top line and wide hindquarter.

“He (Neptune) will be used over Angus and Limousin cross heifers,” said Mrs Goody. 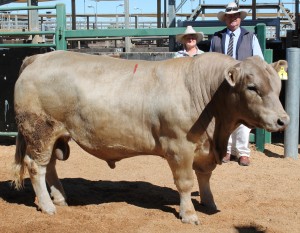