Recently a line of 7 Murray Grey purebred steers were consigned by Monterey Murray Grey stud at Karridale, WA to  Western Meat Packers and they surprised everybody. The steers all culled as bulls were all either milk tooth or 2 tooth steers. They dressed out at an average 398.04 KG  at an OTH price of $5.10 to average $2029.71. The heaviest steer dressed out at 491.9 KG to realise $2506. The steers were ideally finished with an average fat depth of 11.85mm. 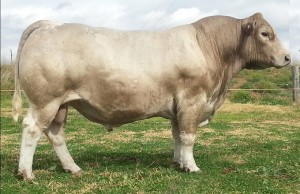 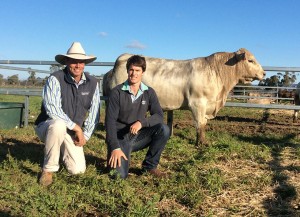 Spirited bidding by new and return clients showed outstanding confidence in Wallawong Murray Greys’ breeding program with 100% clearance at the 18th Annual Carcase Quality Sale at ‘Marriot Park’ Gunnedah NSW Thursday 2nd July. Several new milestones with the sale were achieved by principals Lachlan and Kate James who described the sale as “an awesome endorsement of our carcase quality focus”. 21 of 21 Bulls sold to a top of $20,000 and an average of $6666, reflecting the very strong competition for lots throughout the sale. 11 registered heifers were also sold to a top of $2750 and average of $2068. 6 commercial heifers reached $1700 each.
Impressive weights and eye muscle areas combined with finishing ease appealed to both stud and commercial producers with registered bidders from Western Australia, Queensland, Victoria and throughout NSW.
The $20,000 top priced bull was Lot 2 Wallawong Xyris LEJ J16, a 850kg Melaleuca Chaser son of elite donor cow Bundaleer Esmeralda A32. His raw EMA scan was 121 cm2 with fat scans of 10mm and 6 mm on rump and rib. Xyris was purchased by Southend Murray Greys of Katanning, Western Australia. Southend Stud Principal Kurt Wise travelled over for the sale and described Xyris as an exceptional sire in the flesh and a complete outcross to the Southend herd.

“Xyris caught my eye with the photo on the catalogue. He showed great strength of spine, exceptional sire’s outlook and softness. I was also very impressed with his maternal blood line with his grandmother still calving at 15.”

“On seeing the bull in the flesh I was impressed with Xyris’ softness, length, large frame, deep, thick body, sound feet and quiet temperament. He was a very complete package. I decided that he was definitely the bull that was going to complement our herd.

I am looking forward to using Xyris throughout our herd, giving a quality outcross option to our clients in the future.” Kurt Wise, Stud Principal, Southend Murray Greys, WA.

The second top priced bull was Lot 1 Wallawong Winchester who achieved $10,000. An Embryo Transfer calf by Lindsay Starbright S117 out of Mt View Valdawn, 950kg Winchester displayed a powerful carcase with great width of topline and a genuine B+ butt score. He possessed a raw EMA scan of 131cm2 and fat measurements of 9mm and 7mm on rump and rib. Repeat Wallawong clients PBR Properties, purchased the bull for their commercial operation and high quality beef business near Biddaddaba, Queensland. Owner Preston Richardson travelled down for the sale, also taking home the top priced registered heifer Wallawong Gale K63 for $2750.
Lot 7 Wallawong Xtra Modern caught the attention of many buyers, being the first Wallawong Ultramodern son in the catalogue. Ultramodern was the sire of the Grand Champion Carcase at 2015 Sydney Royal Easter Show and Xtra Modern was finally sold to phone bidder Ray Cross, Mackay QLD for $8500. Mr Cross also purchased Lot 5 for $6000 and a heifer for $2000. The six Wallawong Ultramodern sons averaged $6666.
After inspecting Wallawong bulls at the recent Beef 15 event in Rockhampton, new client and volume buyer Mitchell Clapham of Brookstead QLD took home four bulls for an average of $4750 and ordered more for delivery later in the year.
Wallawong stud principal Lachlan James said: “It was a great result. It was really encouraging to see new and repeat clients from WA, Victoria, Queensland and New South Wales compete strongly throughout the catalogue.”
“The strength of the sale was clear evidence that well muscled Murray Grey bulls producing progeny that meet MSA requirements are highly valued in the commercial beef sector.”
“Murray Greys are going from strength to strength and people are willing to invest in our best genetics with the right balance of carcase shape and quality.”  Mr James added.
The registered heifers were purchased by a mix of stud and commercial buyers seeking quality females for their respective operations. Andrew and Sharon Gunn from Mundalola Murray Greys, purchased a heifer with an elite carcase pedigree – Wallawong Caldora K46 for $2500 to boost the numbers of their stud herd near Attunga, NSW. Stetson Park Grazing QLD, purchased 2 heifers to $2250 and a bull for $5500.
Local Somerton commercial breeder and long term Wallawong client, Julie Barnier, selected two heifers to a top of $2250 and a bull for $6000 while repeat buyer Michael Chamberlain of Nundle also purchased two registered heifers to $2000 along with six commercial heifers for $1700 each. Parsons Green Grazing, Glen Innes also selected two heifers to $2000 to expand their registered Murray Grey herd.

With 76 registered buyers and another surge in confidence on the back of unprecedented beef prices recorded earlier in the week, all signs were pointing to a cracker of a sale.

And the buyers delivered on expectation.

This capped off a stunning recovery from last year’s modest results where nine of 26 bulls sold to average $3411, a mighty $2106 jump in average.

The 754kg silver son of homebred parents Corroboree and Melissa F268 displayed a balanced set of growth and carcase data within the breed’s top 25 per cent for most traits including top 5pc for scrotal size (SC) (+2.0), eye muscle (EMA) (+2.6) and retail beef yield (RBY) (+2.0).

The Middletons run a split herd of 200 Angus and 200 Murray Grey breeders and have been sourcing some bulls from the Monterey stud for six years.

The Middletons also purchased a Monterey Escalator son for $5250.

“The Middletons are regular suppliers of cattle to the Elders weaner sales at Boyanup in the summer,” he said.

“To lift the quality and really produce a top product, they have been trying to buy bulls from the top 20pc of the bull sales they attend.

“The top bull had a magnificent temperament, was extremely well balanced and had a true Murray Grey head.”

The $6500 second top price was paid by both the volume buyers in the Murray Grey line-up with Kanandah station, Kalgoorlie, and BV Smith, Mettler, collecting four bulls each and paying from $5000 to $6500.

Kanandah station bid to $6500 on its first selection and the fifth bull into the ring, Monterey Jindalbie J232.

The 858kg Jindalbie was an early July 2013-drop son of Monterey Freight Train and described as one of the picks of the catalogue. 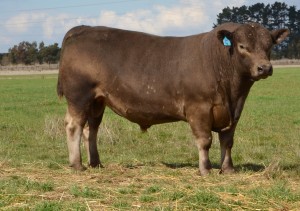 A new selling system at the 36th Woodbourn Murray Grey Sale saw a total clearance of bulls and females. There was wide acceptance of the new selling system and the large crowd was happy to make their purchases viewing large photos of bulls on two screens. Woodbourn decided to use this new method of selling bulls to conform to OH & S requirements.
Pictured is the top priced bull  Lot 4 Woodbourn Jurassic J44.
The females were still brought through the ring for sale. Having a total clearance of all animals offered was very pleasing for the Wallace family. A long morning tea before the sale and a good lunch afterwards were enjoyed by everyone on a sunny crisp Tasmanian day.
The 28 bulls offered all sold for an average of $4696, the 10 adult females averaged $2925 and the 29 heifers averaged $1587.
Pictured below is the top priced female Lot 33 Woodbourn Miss Sybil D36 with her female calf at foot. 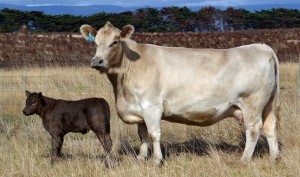